Remember that episode of Full House where D.J. auditions for a cereal commercial, only to have it inadvertently stolen out from under her by Stephanie?

That’s the situation American Idol nearly found itself in on Monday when Katy Perry and Lionel Richie asked 20-year-old Payton Taylor — who only attended the auditions to play back-up guitar for her sister, 18-year-old Taryn Coccia — to step up to the spotlight and take her own shot at stardom.

Fortunately, Idol‘s version of this story ended with both sisters getting golden tickets, but methinks the drama is far from over. I’ve seen too many episodes of UnREAL to think the producers would pass up a chance to milk some good TV out of a sibling rivalry. In fact, my jaded self isn’t entirely convinced this whole thing wasn’t a set-up.

And that was just one of several stand-out moments from the penultimate audition episode of Season 16. (For those of you who read last night’s recap, you’ll be happy to know that I popped a few happy pills and very much enjoyed this two-hour marathon of auditions.)

On that note, let’s discuss 12 more of tonight’s most memorable (for better or worse) auditions: 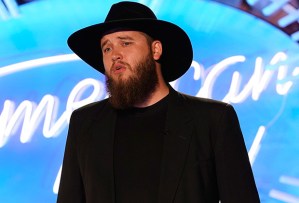 TREVOR MCBANE, 22 | There are some Idol contestants you just can’t help but love right off the bat, like this small-town goat farmer who proudly introduced his 81-year-old grandmother as his “best friend in the whole wide world.” As Luke Bryan noted, McBane’s performance of Zac Brown Band’s “Colder Weather” was “not perfect,” but the judges saw enough potential in him to hand over a golden ticket. (Personally, I would have sent him to Hollywood purely for naming his newest calf Simon Cow-ell. I mean, come on!)

AUDRIANA BOLTON, 20 | Maybe it was the underscoring of Demi Lovato’s “Confident.” Or maybe it was when Bolton announced, with absolutely no irony whatsoever, that people often compare her to Ariana Grande, Mariah Carey and Christina Aguilera. Whatever the reason, this overzealous songstress appeared destined to go down in flames… which she totally did with her wackadoodle rendition of Aretha Franklin’s “(You Make Me Feel Like) A Natural Woman.” To her credit, though, that self-taught whistle tone was actually kind of impressive. Like Lionel Richie, I wasn’t really sure what I was listening to, but I respect it. And I fear it.

GENAVIEVE LINKOWSKI, 18 | I imagine it would be enough of an honor to have the American Idol judges describe your voice as “pop magic,” but I can’t even begin to fathom what it would be like for Richie to tell me that my voice reminds him of the first time he watched a shy, young Celine Dion perform for an audience. Yet that’s exactly what happened to Linkowski, one of 10 children who put her musical aspirations on hold to care for her siblings when her mother’s health took a turn. And the judges’ praise was well-deserved, as Linkowski’s audition was easily the most effective use of Jason Mraz’s “I Won’t Give Up” since that heart-squeezing first trailer for This Is Us. (In other news, does footage of that Dion performance exist? That seems like a thing I need in my life.)

KENEDEE RITTENHOUSE, 19 | Was this Carrie Underwood super-fan the best singer of the night? Absolutely not. But did it take crazy cojones to accept Perry’s challenge and belt “Firework” directly in her face? Uh… yeah. The fact that Rittenhouse actually managed to nail most of the high notes was merely the cherry atop this unconventional audition, which began with a somewhat underwhelming rendition of Underwood’s “Told You So.”

BRANDON ELDER, 22 | My first ugly sob of the night came courtesy of this Alabama construction worker who performed an original song about his late mother who adopted him after he was traded for a car by the teenage girl who gave birth to him. (Holy emotional backstory, Batman!) He told the judges he felt “blessed to be here,” but it was truly we the viewers who were blessed by Elder’s growly, soulful, painfully honest audition. I’m excited to see him again.

CODY MARTIN, 26 | There’s a lot to love about this guy, but for me, it comes down to two simple factors: First, he’s the only contestant in American Idol history to earn a golden ticket by performing “Happy Birthday,” which he sang to Perry as he entered the room. (Yeah, his voice was so sick, he didn’t even need to formally audition.) Second, he shares a name with Cole Sprouse’s character from The Suite Life of Zack and Cody, which also has to be a good sign. I mean, have you seen Riverdale?

VICTORIA MCQUEEN, 15 | If there was a prophecy written about American Idol — and I’m not saying there isn’t one, just that it has yet to be unearthed — I’m pretty sure this girl, born on the same day that the show premiered in 2002, would be heavily featured. Auditioning for Idol was a full-circle moment for her, a moment she totally seized with her pitch-perfect performance of Stevie Wonder’s “Don’t You Worry ‘Bout a Thing.” Perry’s poker face is usually pretty on point, but even she couldn’t conceal how impressed she was with McQueen’s gifts.

BRITNEY HOLMES, 28 | I’m not going to lie, I’m really puzzled over the outcome of this audition. I wasn’t expecting much from Holmes at first — vocal coaches tend to be a little too technical for the judges’ liking — but her powerful performance of Whitney Houston’s “I Have Nothing” was, like, dizzyingly good. Even the judges told her how impressed they were that she nailed the iconic ballad’s trickier notes. I was sure that Holmes would be heading straight to Hollywood, but alas, some things aren’t meant to be. At the very least, she’ll probably get a few more vocal students out of this. (Side note: It was ironic that Holmes’ audition was followed by a segment in which the judges talked about finding “real talent.”)

DOMINIQUE, 26 | If this silky smooth rendition of Donny Hathaway’s “A Song For You” sent chills down your spine, you’re not alone; Perry literally lifted her leg above the table to show that her hairs were standing on end. Or maybe she just had goosebumps. I don’t know, I’m not a doctor. (I will, however, say that I’ve never heard of “chill bumps,” as Bryan called them.) Anyway, this legal assistant won’t be stuck behind a desk for much longer, as the judges served Dominique with a unanimous and well-deserved “yes.”

AMALIA WATTY, 28 | I don’t have much to say about this groovy, Macy Gray-esque performance of Bob Dylan’s “Make You Feel My Love” other than I loved every damn second of it. In fact, it was so good that it prompted me to Google “chill bumps” to confirm whether that was a nonsense term coined by Bryan. As it turns out, that is a very real term!

DANIEL ETHRIDGE, 22 | Sometimes the only backstory you need is that you’re a “chubby Korean kid” who really loves his sister. That, combined with a whole lot of talent, is what’s propelling Ethridge through to Hollywood. His voice didn’t blow me away, but the song he wrote for his sister — who was bullied at school for telling people that her brother was “famous” — was absolute dynamite. I fully agree with the judges who feel that “there’s something interesting there” they’d like to explore. 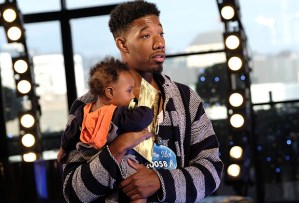 MARCIO DONALDSON, 28 | My second (and significantly uglier) ugly sob came from the final audition of the night. Donaldson’s story about adopting his drug-addicted sister’s baby (at just a week old!) to save it from life in the foster system was a true gut-punch. The tears came early, they came hard and they did not let up. Donaldson’s performance of Labyrinth’s “Jealous” was a little uneven at the start (nerves played a small role in that), but once he found his strength, he delivered a beautiful, emotional rendition that kept the tears flowing. (His and mine.)

Which of Monday’s auditions — including any I didn’t mention — stuck out to you? Drop a comment with your thoughts below.