Brooklyn Nine-Nine is back — and we need to talk about Kevin.

It’s been four long months since the fall finale, during which Seamus Murphy threatened the wellbeing of Captain Holt’s husband. The spring premiere picks up later that day, and finds the entire squad enlisted to discreetly escort Kevin to a transport van. Holt is waiting inside to bring his significant other to a safe house, where he’ll remain until the Organized Crime division moves in on Murphy. Jake volunteers to guard Kevin for the weeks-long stay, unaware that he’ll be cut off from communicating with Amy, Charles and the rest of the outside world. Holt takes all of his electronic devices, leaving him only with an assortment of mostly awful Nicolas Cage movies. 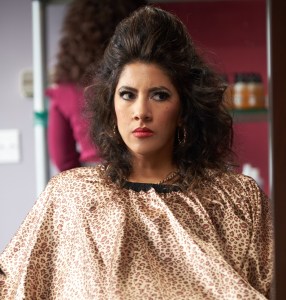 On week nine — yes, week nine! — Holt arrives with good news: Organized Crime is about to raid Murphy’s compound. The Nine-Nine gathers at the safe house to watch it via satellite, but the whole thing turns out to be a bust. Murphy isn’t there, and remains at large. The squad is then forced to take the search into their own hands: Charles and Gina assist Rosa, who goes undercover as a customer at the nail salon where Murphy’s mistress cuts hair. Back at headquarters, Amy has subpoenaed the shredding company that provides services to Murphy’s businesses, and has retrieved what looks to be hundreds of thousands of shredded pieces of paper. Scully, who turns out to be something of a beautiful mind, is able to assist Amy and Terry and eventually piece together an important address.

Kevin begins to go stir crazy, and convinces Jake to take him to a library to do research for his next book. They disguise themselves as perverts, but it’s no use. Not only has Holt been tracking their every move, but Murphy’s henchman is on their tail. When he’s discovered to be on the back of their bus, Jake and Kevin make a run for it at the following stop, and Holt is captured and brought to Murphy. Afterwards, Jake rings Charles, Gina and a newly blonde Rosa (!), who have just learned through the ditsy beautician that the criminal is hiding out in Rhinebeck. He then puts in a call to Amy, who has that address, thanks to Scully.

Once they get there, Jake refuses to let Kevin go inside and advises him to go back to the safe house. The detective is then almost immediately spotted by Murphy’s right-hand man and brought in to join a tied-up Holt. Before the mobster gets a chance to kill either of them, though, Kevin comes crashing with his car, hitting the hired hand in the process. He then gets out and proceeds to give Murphy a laryngeal fracture.

We then cut to our final scene, where Jake is returning to the precinct for the first time in nine weeks. Holt is delighted to inform him that Murphy’s in prison, and his entire organization have been toppled by the FBI. Jake and Kevin then exchange pleasantries, and just when it seems like they’ve become friends, the detective goes and ruins it by revealing he failed to screen two of Nic Cage’s better films back at the safe house: Period piece Captain Corelli’s Mandolin and the Oscar-winning Leaving Las Vegas.

Side notes and quotables:

* I love that Charles is still upset about the cancellation of Bunheads.

* Holt begins and ends all his text messages with a polite salutation, because of course he does.

* “I came alone” has to be the dirtiest “title of my sex tape” yet, right?

* “It’s my fault that Murphy’s after Kevin. Capt. Holt bailed me out, and now it’s my turn to bail him out. Plus, we’ve got this whole tit for tat thing going, and it’s my time to tit. It’s my tit turn. My time to tit is today, Terry.”

* “You kind of look like Phil Spector when he was on trial.”

What did you think of Brooklyn Nine-Nine‘s spring premiere? Were you satisfied with the conclusion of the Seamus Murphy arc? Weigh in via the following poll, then hit the comments.