Sunday’s American Idol marked the fifth and sixth hour of Season 16 auditions — and I’ve never been more ready to move on from anything in my life.

Sure, I enjoyed Katy Perry subtly shading Taylor Swift, and I’m glad she refrained from kissing any more contestants against their will — but tonight’s painfully tedious episode went down like Nyquil. A few more auditions and I might have fallen off my chair, Lionel Richie-style.

On that uplifting note, let’s hash out nine of the most memorable (for better or worse) auditions from Episode 3: 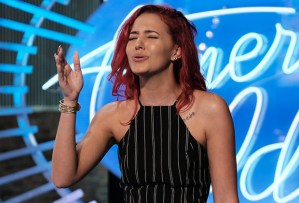 CRYSTAL ALICEA, 20 | The first singer of the night claimed to lack confidence, but you’d never know it from her powerful performance of Sam Smith’s “Lay Me Down.” On top of Alicea’s talent, Perry praised her personality, adding that she has the “it” factor they’ve been looking for. “Crystal, I think you’re a little star,” Perry told her. “I would totally follow you on Instagram.” (Wait… Is that what this competition is about?)

KRISTYN HARRIS, 23 | As much as I enjoyed this Texas gal’s yodel-heavy performance of… whatever that was… this audition was really more about the pre-song banter. Like when Harris showed the judges how to milk a cow, which led to Luke Bryan telling Perry, “If you had your udders milked on a regular basis, they’d get raw!” Like, I’m very happy for Harris — whose unique voice earned her a golden ticket to Hollywood — but her performance is not what I’m taking away from that.

JONNY BRENNS, 18 | This tall drink of water enticed the judges with an original ditty tentatively titled “Blue Jeans” — he plans to rename it something more original — but his lack of range nearly cost him a golden ticket. If I’m being honest, I was so hypnotized by this vertically blessed angel, I didn’t even care that he was barely touching his guitar when he performed, nor was I bothered by the respect he showed for his musical boundaries. 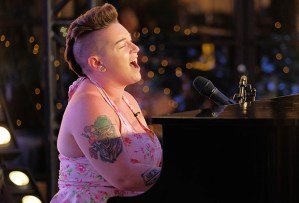 EFFIE PASSERO, 26 | Easily the strongest female performer of the night, Passero had my full attention from the moment she walked into the room. (What can I say? I love me a good tattoo/sundress combo.) And the only thing more enjoyable than listening to Passero’s stunning vocals was watching Richie and Bryan struggle to make sense of the performance. Richie was so puzzled by her sound that he literally inspected her body for audio tricks. He also called her their “Secret Weapon, to which Luke added that she’s their “Patriot Missile.” (Wait… when did this show become about war? Come to think of it, Richie made multiple references to “the arsenal” this week. This conspiracy goes all the way to the top!)

TYLER “COUGAR” GORDON, 25 | This furniture salesman told America, “You guys aren’t going to forget about me.” And he was so right — yet so wrong. For those who didn’t see Gordon’s audition, imagine a bizarro version of Adam Lambert (all of the screaming, none of the talent) and add in a generous helping of “Crazy Frog.” And then, I don’t know, toss it all in a blender and take cover?

JOHNNY WHITE, 18 | This was another audition that got real weird real fast, though for very different reasons. After sharing his inspirational story, White screamed James Brown’s “It’s a Man’s Man’s Man’s World” at the judges, which they found to be, well, a little too much. … You know what I found to be too much? Richie instructing White, “You’ve got to make love to it, but you need a little foreplay before you do it,” then walking over to him and rubbing his shoulders while he sang a second song which, thankfully, got him through to Hollywood. 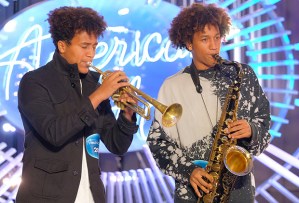 JULIAN AND MILO SPOSATO, 17 | On paper, 17-year-old twins playing saxophone and trumpet while singing Bruno Mars should not have worked. Yet it did… for the most part. I’ll admit that the performance was uneven, but I want to see what else these guys have to offer. As does Perry, who applauded the teens for being “serious about music,” which she thinks is “really cool.” Unfortunately, she used her next breath to tell them, “You could also be Instagram models.” (Just when I thought we were making progress, Perry!)

LES GREENE, 27 | I was really starting to drift off at this point, so boy did I appreciate the alarm clock-level power that Greene’s voice carried. He reeled me in with the story of his difficult childhood (“What we lacked in food, we made up for in love”), then kept me hooked with that sweet, gravelly voice. Bryan even went so far as to call him a Ferrari… before warning how easy it is to crash when you’re driving one. (Thanks?)

MADDIE ZAHM, 19 | At least Sunday’s Idol finished on a high note, introducing us to this guitar-wielding goddess. Gaining weight in high school caused her to lose confidence — as well as to abandon her music — but meeting her best friend Marcus, a singer with Down syndrome, helped her find herself and her voice. At this point, all I wanted was for Zahm to be good… and she was great, crushing an acoustic version of Dua Lipa’s “New Rules,” which is a song I didn’t think would ever make me cry. I was wrong. And don’t even get me started on her and Marcus’ duet of “Firework.”

Which of Sunday’s auditions — including any I didn’t mention — were your favorites? And, seriously, how ready are you for this part of the process to be over?! Drop a comment with your thoughts below.