This week on Marvel’s Agents of S.H.I.E.L.D., things got very heavy as the team found gravitonium in the last place they’d think to look, while General Hale’s daughter helped a newcomer feel at home.

In need of a buncha gravitonium to patch up the “tear” into the Fear Dimension, the team went about searching for the stash that Cybertek back in Season 1. To that end, they first tracked down Tony Caine, a guy who suspiciously signed the death warrants on all the scientists who used to toil for Hydra. Caine, it turns out, is an old (and slightly sketchy) Academy buddy of Mack’s, so he’s happy to help the team with this world-saving mission. (May and Daisy, meanwhile, hope that getting a bead on Cybertek’s wares will cough up a fix for Coulson — though he insists he has no interest in a second life extension.) 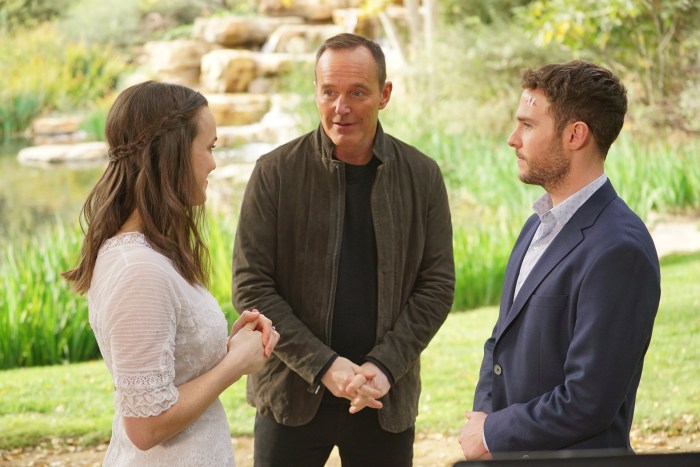 Caine leads Mack to Dr. Getty, one of the scientists who in fact didn’t die but was given a new identity/life, as recompense for being forced into Hydra servitude. Getty says that the gravitonium stash was loaded onto a ship that never made it to its destination, but reportedly sank during a storm at sea. Fitz does his best to seek out the sunken ship, but comes up empty — until, that is, his babbling buddy Deke gets the idea that the gravitonium, if supercharged by, say, a lightning strike, raised the ship… into the sky. And sure enough, up among the clouds is where the Zephyr finds it!

Boarding the airborne ship, Mack, Coulson and Daisy find a big glob of gravitonium, which Mack gingerly slips into a handy case. That leaves them 90 seconds to get off the shop, before it starts plummeting back into the ocean. And not helping matters is that several of General Hale’s “mechs” had been left aboard the ship, and stand in the agents’ way. Together, they fight some off, until Mack sends Coulson and Daisy on ahead with the box. Mack aka “Mackhammer” then declares it “Hammer Time” and begins pounding on and chopping up the mechs, until he too makes it to safety.

Meanwhile at the Lighthouse, drips and drabs of leaked “Fear Dimension” a bit inexplicably conjured up Deke’s mother (aka Jemma and Fitz’s daughter, shhh). She appears mainly to regurgitate a quote her “mother” used to always say, about how it’s not the size of the steps you take, but that they’re in the right direction. We are then left to count the seconds until Jemma herself busts out that exact quote within earshot of Deke, which she does a few scenes later, leaving her kin half- gobsmacked, half-delighted, as he keeps the discovery to himself and proceeds to help “grandpa” fix the tear. After Caine promises to dig into the old Deathlok program and then bid the team adieu, Mack delivers a present for Yo-Yo from the ship — a fallen mech/arms donor!

Family ties: Can’t you just see the resemblance between the men?

Elsewhere in the episode: Werner “Please, Call Me Alex” Von Strucker had just assaulted a shrink when he later woke up inside a room at the same safe house where General Hale keeps daughter Ruby. Alex fumbles his away around, winding up in the galley, where he first spies but fails to get the attention of Ruby. Later, Alex finds Ruby working a bag at the safe house, and they get to talking. Alex now boasts a super-memory that puts Marilu Henner to shame, and he remembers that he and Ruby used to play together as kids, because their parents were pals. Alex then pulls a knife on Ruby and demands to see her mother, and get an audience with her he does. 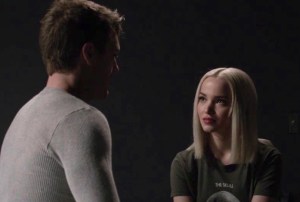 General Hale explains to Alex that she had him transferred to her facility lest he receive a chemical lobotomy. She invites him to help her build a “better future” for the likes of him and Ruby. Alex suspects the general wants to know what he remembers his father saying during the Hydra days, but she feigns indifference. In fact, he can walk away the next morning if he chooses to. But to make sure he doesn’t, Hale tasks Ruby with getting inside Alex’s head by any means necessary, even if it means… you know.

Ruby, however, chose a bold tactic — the truth, telling Alex that she was invited to seduce him to win him over, and that yes, her mother does want to know what he remembers overhearing. But if he plays along, Ruby says they can create their own “team” — and the illusion of choosing a righteous, self-serving path appeals to him. Though Ruby’s hand on his leg surely didn’t hurt. Afterward, she introduces him to other team members, including Carl “The Absorbing Man” Creel!

What did you think of the episode “Principia”?