For all the sexypants going on in Thursday’s Grey’s Anatomy, it was still a rough week for several of Grey Sloan’s finest, at least at first. Meredith, as you’d expect her to be in the wake of “Games People Play,” was trying to binge FEUD: Ellis and Marie as best she could, that not being on Netflix or a series or anything. Alex was as chagrined as any Jolex fan to learn that, after all he and Jo had been through, she was applying for fellowships here, there and also everywhere. And April, poor April, hit a new low, waking up with the show’s version of Family Guy’s Quagmire, Koracick. Which, if any, of them were able to turn it around by the end of the flashback-filled hour? Read on and find out. 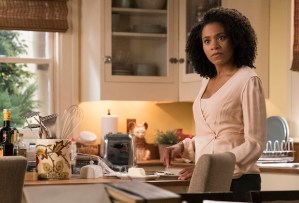 ‘FIRST LOVE, RIGHT?’ | As “Old Scars, Future Hearts” began, Mer, though focused on her research into her mom’s past, still noticed how distracted Maggie was. “You just buttered the kitchen towel,” Mer noted. Across town, Koracick offered to make breakfast for April, who was eager to have him leave before she puked. And at Jo and Alex’s, he discovered that she was applying for fellowships as far away as Northwestern. At Grey Sloan, Maggie became so flustered by the sight of Jackson that she dropped her coffee. She still turned down his offer of a date rather than lose focus during her big Dor-procedure surgery that day on a cosplaying gay teen named Charlie whose romance sparked a flashback to a young Alex’s first love. Unbelievably, it was only a little while later that a heart became available for transplant. But, for fear that his new heart wouldn’t love his boyfriend Henry like his old one did, the kid insisted on going forward with the Dor procedure instead. “Give the new heart to someone else,” he said. If the Dor procedure only bought him another year, so be it. He’d spend it in love. Not so fast. To get Charlie to have the surgery, Henry broke up with him, saying he couldn’t be with someone who didn’t believe in science.

During a flashback to 2003, Jo’s first love rode to her rescue when her car was being towed. She was reluctant to be around his perfect family, however, being the street rat that she was. We also got a fairly adorable flashback to Maggie in (pre?) med school as “first-cut virgins” with the boy she liked. The would-be docs even stole their cadaver’s heart to have a funeral for the guy they’d practiced on. When not bopping back in time, Maggie, Alex and Jo attempted to transplant the new heart into Charlie… only it was too big; it wouldn’t fit! The docs decided to leave the patient open overnight, wrapped up in medical-grade plastic wrap overnight, until the swelling went down. Filling in Charlie’s mom, Alex flashed back to his mom freaking out off her medication in front of his first girlfriend. In the O.R., things looked grim for Charlie for a hot minute, but after charging his new ticker a coupla times, it started beating again. Waiting nearby, Henry admitted to Maggie that he’d only dumped his beau to save him. At the end of the day, Alex didn’t want to talk to Jo about how much he’d been “brooding” over her applications. “For the first time,” she pointed out, “I can do exactly what I want to.” He just hadn’t realized that Paul, not Alex, had been the one keeping her in Seattle.

‘INSPIRATION IS INTANGIBLE’ | Meanwhile, when Marie arrived at the hospital, Mer confronted her right off. “Are you even going to let me license the patent?” Grey asked. “There is nothing petty here,” replied Marie, asking whether she was interested in her side of the falling-out story. According to her, Ellis had won her second Harper Avery with work that both she and Marie had done. “When she betrayed me, it was unimaginably painful,” she said. “She broke me.” In response, Mer asked if maybe Marie had given her too much power. Maybe, Marie admitted. Regardless, she felt she had a right to the work stolen from her. So if Mer wanted her patent, she’d have to publicly state that Ellis had developed “the Ellis Grey procedure” with Marie and rename it the Grey-Cerone procedure. Richard’s advice to Mer? Don’t undo her mother’s legacy when she wasn’t there to defend herself. That night, Mer and Alex were getting shnockered by firelight when downstairs strolled Amelia, who’d apparently been knocking boots with Owen almost non-stop since the previous day. When Karev opened up about the possibility of Jo leaving, Mer pointed out quickly that that didn’t mean she was leaving him. “She’s not Izzie.” During another flashback, Alex overheard his girlfriend telling all their friends about his “crazy” mother and saying that she was breaking up with him. 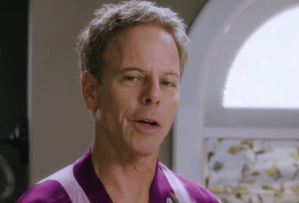 ‘VODKA, BABY FOOD AND QUESTIONABLE CHEESE’ | By the time April rolled out of bed, Koracick wasn’t as she’d hoped gone. When he expressed interest in her beyond sex, she asked him not to bother feigning interest; she’d sleep with him again, anyway. He was curious, though: How had the woman Amelia’d once given her power of attorney to become the woman he’d been with last night? After about 100 guesses, he finally hit upon “God is dead” as the reason for her sudden transformation. No, April insisted. He wasn’t dead. “I just hate Him so much, I wish He was.” That night, Koracick was still there, having a whole, elaborate discussion about her crisis of faith. Is there more to Koracick than we gave him credit for? In fact, there was. His son had died in a freak accident at school. “It was unfair,” he understated. “The priest said, ‘Talk to God,'” but the grieving dad only wanted to choke the life out of God. In the aftermath, Koracick’s marriage fell apart, and he started going to church to talk to his son. “I still do,” he said, adding that neither had he left God or vice versa, they just got in a fight, that’s all. “Your turn,” he then said. Rather than talk, April reminded him he was there for sex.

‘IT ISN’T YOUR CRIME AND SHOULDN’T BE YOUR BURDEN’ | As the hour drew to a close, before going into the O.R. to finish up on Charlie, Jo told Alex she’d missed him (as he’d slept at Mer’s rather than go home). Jackson overheard Maggie recalling the dorky poem she’d read to her cadaver — and the boy she liked. Once Charlie was in recovery, Henry proclaimed his love poetically. Later, dropping off Harriet at April’s, Jackson got an eyeful of Koracick in her robe. From there, Jackson went to the bar, where he bonded some more with Maggie and insisted that he, too, had real pain and wreckage even though he’d been prom king four times. Now could he finally take her to dinner? Yes, she said. Back at the hospital, Meredith told Marie that she couldn’t bring herself to undo her mother’s legacy. Marie understood; regardless, she’d be taking Mer’s project, and forevermore, her livers would be known as the Cerone livers. And when Alex went home, Jo, having recalled running from her old boyfriend who loved her, started explaining that she’d never fit in, so she’d always wanted to run… till him. “You’re so screwed up that you make me make sense,” she said. “I never wanna go anywhere without you. You are my home.” Before he could find her engagement ring, she revealed that she was already wearing it, knelt down in front of him and proposed. You bet, he said with a kiss.

So, what did you think of the Ellen Pompeo-directed episode and all its flashbacks? Rethinking Koracick? Happy Jolex are engaged? Hit the comments.