This week’s X-Files — the last before the season (and probably series) finale — is simultaneously what I love and loathe about this show.

Let’s start with the loathe. The episode felt a lot like it could’ve run in the original seasons… like in Season 9, like “Sunshine Days.” (For those who haven’t watched since way back, that’s not a good thing.) It spends a whole lotta time hanging out with a kinda-creepy cult and not enough time with our favorite agents. And when we do get some extended conversations between Scully and Mulder, the gravity of what they discuss feels shoehorned in, more a way to set up next week’s mythology-centric season-ender than to give their long partnership and sometime romance the discussion it’s due. Coming off two very strong episodes, it’s a let-down.

But the parts of the episode I loved, I truly adored. As in last week’s “Familiar” and this season’s “Plus One,” Mulder and Scully are the most watchable when they’re feeling a little bittersweet, a little tired, a little worn down by their years in the literal and metaphorical basement. And at the end of this week’s episode, the pair is at a very low ebb indeed while they discuss what might’ve been, as well as their hopes for the future. Then Mulder gives Scully the closest thing we’re going to get to a non-drugged-out “I love you,” and they decide to forge their fate together. Plus, that conversation about when Scully started believing in God? And Maggie’s quarter’s reappearance? Yeah, I’ll take it.

Read on for the highlights of “Nothing Lasts Forever.”

VENGEANCE IS MINE | In a shady-looking operating room that is certainly not in a hospital, two men in surgical masks and gowns crack open a patient’s chest and start harvesting his organs. Outside, a young woman perches on top of a commercial truck, waiting. (Side note: Anyone else notice that the truck driver was listening to Tad O’Malley’s show while he waited? I tried to match up that audio with Tad’s broadcasts in Season 10 but couldn’t find overlap — if you do, please holler.)

The woman on the truck prays, then infiltrates the sketchy surgical unit and kills one of the doctors and a thug who was trying to leave with some of the organs in a cooler. The other doctor makes it to the truck with another cooler, escaping her wrath. The young woman brings the cooler she salvaged to a local hospital’s emergency room, leaving it outside with the words “I will repay” written in cursive on it.

HOW PROGRESSIVE OF YOU | When Mulder and Scully arrive on the scene, they quickly butt heads with the local agents on the case. Mulder gets extra Mulder-y, making the other agents uncomfortable enough that they hand over jurisdiction. Scully chides him for doing it on purpose. “You think?” he jokes. But the bigger laughs come when Mulder puts on his new glasses, which are bifocals. “They’re called progressives. Progressive lenses,” he corrects her, then takes a good look at her new-ish bob while wearing them. “Did you get your hair cut?” “Are you kidding me?” she replies. (Ha!)

They wind up at a church, where Scully prays for a bit, then talks to Mulder about how she started believing in the Big Guy Upstairs after Charlie was sick with rheumatic fever as a child. Maggie had her kids pray for their brother, but Scully eventually started asking God for a puppy, and when Charlie recovered and the family got a dog that Christmas, Scully’s belief in the divine was cemented. She pulls the quarter that her mother was wearing on a necklace at the time of her death (thank you for the callback, X-Files!) and muses about the power of faith. Mulder listens attentively, then chimes in with, “I think all I have, all any of us have, are the results of all the choices that we’ve made. And at the end of the day, we just hope that we made the right one.”

Outside, Mulder notices that a few of the bars from the church’s fence are missing, and that the finials at the top of the remaining bars match the ones on the rods that the woman used to kill the organ harvester and delivery guy. “Someone is literally using the church to exact vengeance,” he says. 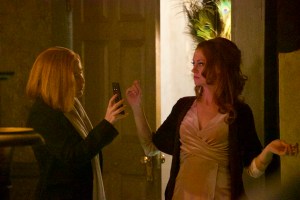 LIVE FAST, DIE PRETTY | Let’s shorthand the rest of this week’s case, OK? The woman we saw killing at the top of the hour is named Juliette, and she’s trying to get revenge on the cult her sister, Olivia, willingly joined a few months back. Apparently this group promises beauty, and Olivia had some pretty severe skin issues. But when Mulder and Scully, off a tip from the church’s priest, show up at Juliette’s house, she stonewalls them by saying that Olivia doesn’t want to come home.

Meanwhile, over at cult central, we see that a 30-something-looking woman named Barbara and a man named Dr. Luvenis preside over a large group of young people who appear to be under their thrall. The appeal is that the young’uns think Barbara and the doc can make them beautiful; the reality is that Luvenis has invented a way to stave off aging — both he and Barbara actually are well into their AARP years — and the process involves drinking liquefied human organs. There’s also a whole thing where Luvenis has a human body surgically attached to his so he can leach off of it. No, I don’t totally understand it. Yes, it is as gross as it sounds. (Side note: Kudos to Fiona Vroom and her batty portrayal of Barbara, which is eminently watchable in a meh Case of the Week.)

Eventually, when the organs run out, Barbara’s followers begin sacrificing themselves. But Dr. Luvenis knows this can’t continue, so he steals the organs Juliette left at the hospital from the facility’s cold storage. If it sounds too easy, it is: Mulder and Scully have placed a tracker in the cooler and convinced the hospital to let the robbery happen so they can locate the cult’s headquarters. 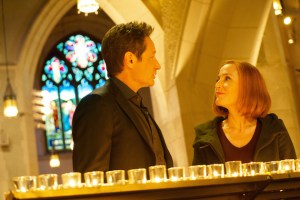 MULDER GLASSES HALF EMPTY | Eventually, Sculder show up at Barbara’s apartment. “We’re looking for an 85-year-old woman,” Scully bluntly tells Barbara who insists that she is the former child actress-turned-sitcom-star they seek. When it’s clear that they’re not going to leave, Barbara starts screaming, which brings her followers running to her aid. One tosses Scully down a dumbwaiter chute; she survives when a ton of garbage at the bottom breaks her fall. Juliette runs in during the chaos and kills Barbara with another fence post. And Mulder runs downstairs to find Scully but runs into Dr. Luvenis and his latest leach-ee, Olivia. The doc raves about how he’s discovered the cure for aging, but before he can get too far, Juliette knocks him down, saving her sister but getting herself a trip to jail in the process. Still, she tells Mulder, it was worth it.

Back at the church, Mulder finds Scully lighting a candle. “I may not believe in God, but I believe in you, therefore I speak to him through you,” he says, which I thought was a nice, believable thing for the character to say. “Reason and faith and harmony. Isn’t that why we’re so good together?” She regards him for a moment. “Are we together?”

And then stuff gets REAL.

“I believed I could protect our son, and I failed. I believed we could live together, and I fled. I gave up on that, too,” she says with more than a little regret, but Mulder says, “If only you’d fled earlier. You know how many times I’ve envisioned that scenario, where you left that basement office before I even needed glasses? You’d have your health, your dog, your sister. You’d be Kersh’s boss at the FBI. You’d be married to some brain surgeon and have a bunch of kids that you wouldn’t have to give up.”

Hold up one little green grey second. “Before I even needed glasses?” 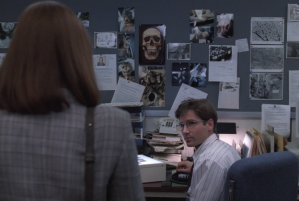 Before I even needed glasses? 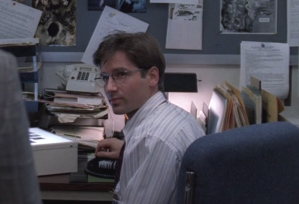 BEFORE I EVEN NEEDED GLASSES? 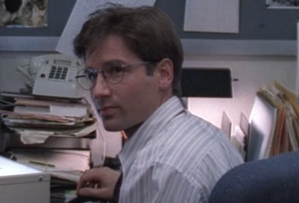 Moving on. Scully says she doesn’t blame Mulder for anything that’s happened or not happened to her. “I don’t know if any God is listening, but I am standing right here and I am listening, right beside you. All ears. That’s my choice,” he says. And I like to pretend that he practiced this in a mirror and then spent a lot of time hemming and hawing about which outfit he wanted to wear when he said it, just to make everything perfect. (Side note: Damnnnnn did he get it right)

Scully looks at him for a long moment, then whispers something in his ear. “That’s not my 4-year-old self looking for a miracle. That’s my leap of faith forward,” she tells him. “And I’d like to do it together.” He looks delighted. And maybe a little relieved? Then Mulder lights a candle, and the choir — which has been providing the soundtrack to this moment — literally says “Amen.”