No, it’s not a full-on Firefly revival… but we’ll take it.

Nathan Fillion is set to guest-star in a pair of episodes of ABC’s American Housewife later this season, and from the looks of the first-look photo posted on Wednesday, he’ll be paying tribute to his role on the cancelled-too-soon sci-fi cult hit: 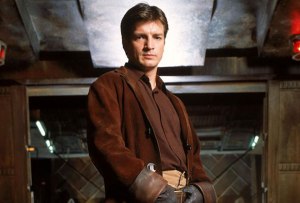 Eagle-eyed fans — which includes us — will notice that Fillion is wearing the distinctive coat and shirt worn by his Firefly alter ego: spaceship captain Mal Reynolds. (The Fox sci-fi adventure created by Joss Whedon infamously lasted just a single season before getting the axe in 2003, although its story did continue in the 2005 big-screen follow-up Serenity.)

Fillion, of course, is no stranger to mining his Firefly past in new roles; as the star of Castle, he had multiple former Serenity crew members stop by as guest stars. But keep in mind: ABC says Fillion will be playing himself on Housewife, not Mal. So maybe the show’s version of Fillion actually is filming a Firefly revival? And why can’t that be our version of Fillion?

Tight, but “like a glove” tight. Seems… right. #americanhousewife

Shh. Gimme a second to concentrate. It’s on the tip of my tongue. I wanna say, serendipity? #americanhousewife

A lot of this is aftermarket. #americanhousewife #firefly #mal

An airdate for Fillion’s episodes hasn’t been set yet, but American Housewife is currently airing its second season Wednesdays at 9:30/8:30c on ABC.

Firefly fans, will you tune in to see Fillion back in Mal Reynolds mode? Drop your thoughts in a comment below.