Wednesday’s episode of American Crime Story: Versace marks the directorial debut of actor Matt Bomer, who — at the risk of sounding “so 2018” — says he was “truly blessed” to get to work on the FX drama.

“When Ryan Murphy called and asked me to do this — after I passed out, regained consciousness and said yes — I knew that it was a serious responsibility,” the actor tells TVLine. “I’d been offered directing jobs before, but they were jobs I was also acting in, and I wanted my first directing experience to be the full-meal deal. I wanted to really do it, to be on the location scouts and design meetings and castings and really have the full experience.” 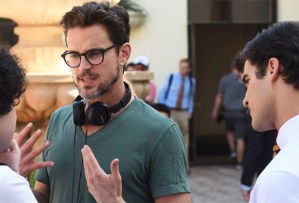 Before stepping behind the camera for his episode’s three-week shoot, Bomer says he read “more than 3,000 pages of material on directing,” met with film and TV directors for guidance, did an intensive at the Director’s Guild of America and shadowed two different directors on three episodes of Versace. To say that he did his homework would be an understatement.

“I wanted the producers to know I was taking this seriously, that they weren’t just putting the camera in the hands of somebody who was just hoping to cruise by,” he says. “I called my representatives who were talking about acting jobs, and I told them, ‘Put everything on hold. This is what I’m doing, this is it.'”

Bomer’s episode — which airs tonight at 10/9c — chronicles Gianni Versace and Andrew Cunanan’s radically different upbringings, showing how “success brought out the worst in Andrew and the best in Gianni.”

“We want to see [Andrew] as a three-dimensional human being,” Bomer says, “but the real challenge of this episode is: Can we sympathize with a monster and see that he was also a victim? We’re all ultimately responsible for the decisions we make and the actions we take, but this is someone who was near to violence at a very young age, who was treated like a spouse by both his mother and his father. The central question of this episode is: What makes one person a creator and one person a killer?”

Location proved to be another challenge, as the characters’ parallel stories take place in “three different countries and five different cities,” all of which had to be recreated in the Los Angeles area. “And I had two child protagonists for the first half of the episode,” Bomer notes. “I was thrown a lot of the challenges you could have as a director, which I’m actually grateful for, because now I can check those off. When someone says I have to work with a kid, I can say, ‘Been there, done that.'”

Bomer adds, “That’s one of the reasons I wanted to be present for everything. It was very clear in the room when I was casting that Edouard Holdener was the right person to play young Andrew.” 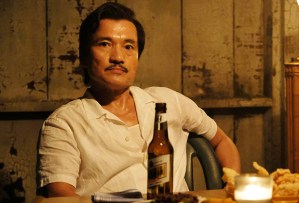 He also praises the work of Jon Jon Briones, the actor playing Andrew’s father, who was first brought to his attention by star Darren Criss and EP/writer Tom Rob Smith. “They’d seen him on Broadway in Miss Saigon,” he recalls. This was a guy who had been doing that show for over 20 years, but he was ready for this experience, and his audition was phenomenal. It’s a testament to Ryan Murphy that he’s willing to take a chance on new people who are ready for the experience and ready to serve the story in the best way possible.”

Speaking of exceptional performances, Bomer says he feels “spoiled” that he had a front-row seat to Criss’ take on Andrew almost from the very beginning. “I knew Darren was a brilliant actor and a great artist, but there were times where I would watch him on camera and it was like he just suddenly was this person,” Bomer recalls. “It was bone-chilling to watch.”

Still, it takes a village to put even a single episode of television together, and Bomer has a laundry list of people to thank: “The director of photography, Simon Dennis, was incredible; Jamie Walker McCall designed that incredible plantation set; Alexis Martin Woodall, what she does in the post department is phenomenal; and Shelly Westerman, who edited the episode, is one of my all-time editing heroes.”

“I was really so lucky to work with Ryan’s people,” Bomer adds. “I’d worked with him for so long [on projects like Glee, American Horror Story and The Normal Heart] that I knew most of the camera crew from other jobs. But the level of professionals you work with in his world are top notch.”

Hit PLAY on the video below for a sneak peek of tonight’s episode, then drop a comment with your thoughts on Versace below.