Stick a fork in The Voice’s Season 14 Blind Auditions — they are done. So what now? What do we know? My inclination is to say that we can make educated guesses about who the winner will be. Buuut that may only be true for you. My track record in that area is, if we’re being super-mega-generous, godawful. My first season recapping the show, Felicia Temple was my pick based on the Blinds. (Go ahead and say it: Felicia who?) Last year, my post-Blinds pick was so embarrassing, I can’t bring myself to remind you who it was. (OK, fine. It rhymes with Stanthony Stalexander.) Maybe all we — or at least I — can say for sure is who made not only a good first impression but a lasting one. (Looking at you, Terrence Cunningham, Johnny Bliss, Christiana Danielle.) If nothing else, we can single out the singers who shone in Tuesday’s final night of the Blinds. Read on, and we’ll do just that. 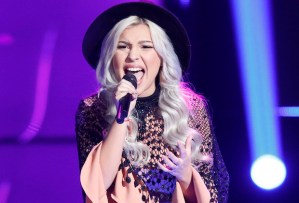 Genesis Diaz, “Praying” (Team Adam) — Grade: A- | This Miami 19-year-old, who looks like she could be Shakira’s kid sister, started her Kesha cover by demonstrating admirable control over her voice, which she maintained even as she launched into the humongous, roaring parts of the song. Not sure what took Adam and Blake so damn long to turn around aside from the fact that their teams were already nearly full. As her future coach noted, Genesis didn’t have her volume turned up to 11 the whole time, and was just as solid in the softer sections as the harder ones. Probably my favorite member of Team Levine.

Sharane Calister, “Make It Rain” (Team Alicia) — Grade: A | This Des Moines 24-year-old stretched notes like they were Silly Putty. Not only that, but she did so with a voice that could go as big as it was soulful (and it was seriously soulful!). Her highs were spot on, her lows were stunning, and you know I can’t resist a vocalist who can pull off an effective growl. Plus, this was somehow a more exciting audition than others we’ve seen this season in the R&B lane, even if those contestants were debatably more technically proficient (Tish Haynes Keys, Kyla Jade).

Dallas Caroline, “Always On My Mind” (Team Blake) — Grade: D | How country is this 17-year-old? She’s so country that she was named for the Alan Jackson song. Unfortunately, she was really tentative vocally in her Willie Nelson cover. Or maybe scared s—less is the better term. As Adam pointed out, she was literally shaking in her boots. So maybe it was that shaking that gave her the goat-like vibrato that made her three-chair turn so surprising. Were the coaches hearing something I wasn’t? The kid can sing — you could hear that between the lines and sometimes in her bigger, stronger notes. But unless she gets the nerves in check, her Battle will be her swan song. 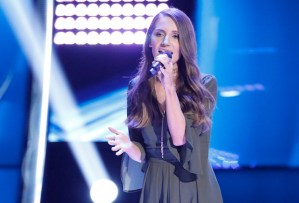 Jackie Verna, “Peter Pan” (Team Adam) — Grade: B | At the start of her performance, this 22-year-old from West Chester, Penn., sounded like she was born to spark another face-off between Blake and Kelly. (She only didn’t because, by that point, Blake’s team was full.) Jackie’s voice, much like Kelly’s, seemed like it could lift up a pop song as well as a country tune. The performance as a whole was a little all over the place — mostly terrific, briefly uncertain and a time or two the sorta thing that made ya go “hmm.” But she was certainly good enough that I’ll be curious to see what she brings to the table in her Battle.

Amber Sauer, “Shape of You” (Team Kelly) — Grade: C | This Kelly fan took to the stage determined to make the coaches hear her “fight.” Sadly, it was a fight I’m not convinced she won. She sounded OK on the verses, then just sounded out of control on the chorus — and not necessarily in a good way. She clearly has a big, strong voice, but that thing’s a weapon — she’s gotta wield it with a bit of care. Kelly said Amber’s high notes sounded “like me on my really good day.” I said, “C’mon, Kelly, who are you kidding?” This wasn’t a showstopper, at best a showpauser.

So, any early faves to win? Who did you think fared the best tonight? Vote in the poll below, then hit the comments.