By mid-May, the broadcast networks must make some tough calls as to which series will return for the 2018-19 TV season, and which… won’t.

Next up is an ambitious musical comedy that may have sung its last tune. 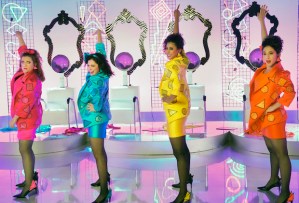 THE CASE FOR KEEPING | Creatively, Rachel Bloom’s musical rom-com is a smash hit. Bloom shines as “adorably obsessed” heroine Rebecca Bunch, who moved cross-country to pursue a romance with her lifelong crush Josh Chan (Vincent Rodriguez III). But Crazy Ex has grown by leaps and bounds since that initial premise: Not only did Season 3 deliver the usual wicked humor and catchy songs — exhibit A: the ultra-timely “Let’s Generalize About Men” — but it hit new dramatic heights, too, taking an unflinching look at Rebecca’s mental-health issues. Plus, Bloom and co-creator Aline Brosh McKenna have said all along they have a four-season plan for the show — so why not let them finish up Rebecca’s story the right way?

THE CASE FOR CUTTING | Here’s why: Crazy Ex‘s ratings are, to be frank, crazy bad. Season 3, like its sophomore run, averaged a steady 0.2 demo rating — tying fellow CW shows Dynasty and Valor as TV’s lowest-rated hourlongs — while its weekly audience of 631,000 is broadcast TV’s smallest. For anything. Anywhere. (The fact that its audience is steady is a good sign, but still: Yeesh.) And though Bloom took home a Golden Globe for Season 1, the Emmys have virtually ignored the show — five total nominations, all in minor categories — which doesn’t give The CW’s brass an excuse to keep it around. Luckily, The CW is expanding to six nights of programming next fall… so maybe that’ll make enough room on the primetime slate to give Rebecca and company a proper swan song? (Please?)

Vote below, then state your own case for keeping or cutting Crazy Ex-Girlfriend.