I’m talking about his team. It is, in short, a mess. Going into Night 5 of the Blinds, only two of his singers whose full auditions aired got B’s from me; the other three were in the C range. And obviously, my grades are far from the be-all, end-all; they’re as spur-of-the-moment as it gets. But, think of it this way: It’s pretty easy to get me excited about a contestant. So easy, in fact, that I’ve had to try this season to curb my natural tendency to get wound up and hand out A’s like they were Certificates of Participation. And thus far, I’m not all that psyched about anybody on Team Adam. He has no Johnny Bliss (Team Alicia Keys), no Brynn Cartelli (Team Kelly Clarkson), no Pryor Baird (Team Blake Shelton). Is Adam just as bad at all this as sparring partner Blake loves to say he is? Or was Adam about to turn the tide in the last week of Blinds? Read on. We’ll discuss.

Stephanie Skipper, “Piece by Piece” (Team Adam) — Grade: B- | Gotta give this Nashville denizen props for having the chutzpah to audition in front of Kelly with a Kelly song. But I’m not sure it was the greatest idea ever. Stephanie’s rendition was competent but not thrilling, so she only succeeded in making me think, “She’s probably nice to hear singing around the house if you happen to live with her,” not, “Oh, man, this is someone I can’t wait to hear on this show for the next two months.” And it probably tells you everything you need to know that she didn’t get a chair turn from Kelly. 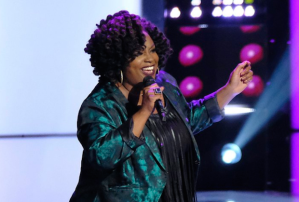 Tish Haynes Keys, “Chain of Fools” (Team Adam) — Grade: B | This daughter of a pastor and a gospel singer put her future on hold when she got pregnant at 14. But honey, the future for her started over Monday. “You just killed Aretha Franklin!” exclaimed Kelly after Tish’s performance. “That was insane!” Dunno about insane, but it was certainly pretty good. Tish demonstrated that she has enough power in her pipes to turn chairs just from the sheer force of her lungs. But whether she has the uniqueness or versatility to knock viewers out of our seats week to week remains a big ol’ question mark.

Bransen Ireland, “Tulsa Time” (Team Blake) — Grade: C+ | From the first note of this Apple genius’ Don Williams cover, he had Blake’s name written all over him. Yet Coach Shelton didn’t turn his chair till halfway through the second verse. Maybe that was because the further into the song we went, the better Bransen got (which I thought he did — the bigger he got to sing, the more I liked him). Or maybe Blake was slow to turn because Bransen couldn’t hold a candle to country competitors like Pryor Baird or Justin Kilgore. 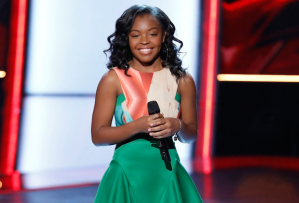 Teana Boston, “Unfaithful” (Team Kelly) — Grade: B- | This teenage honor-roll student, as poised and pretty as is humanly possible, hit the stage like a star already made. Like, damn — when she started singing, the control she seemed to have over her voice was unreal. If you’d told me I was listening to the iTunes version, with all its studio sweetening, I would’ve believed you. Unfortunately, Teana fell apart a little, then a little more, as she neared the end of her Rihanna cover. So I was left reluctantly seeing her going forward as more of a wildcard than a slam-dunk.

Miya Bass, “Issues” (Team Adam) — Grade: C+ | When a singer walks on stage with a poof of pink hair, it’s hard for that colorful coif not to be their defining characteristic, the thing we remember about them afterwards and talk about around the water-cooler the next day. Yet what I came away from this Jamaica, Queens, competitor’s performance most wowed by was how ably she handled the rapid-fire section of the Julia Michaels hit she was redoing. It wasn’t a flawless rendition or anything, but Miya’s charismatic and promising. She might surprise us in a good way. 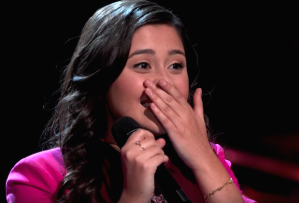 Livia Faith, “Dream a Little Dream of Me” (Team Alicia) — Grade: B+ | Not only is this small-town teen as adorable as Dorothy back on the farm in Kansas, but the ukulele player sings like, if you will, a dream. After she got her first chair turns, I thought she went a little bit flat (a side effect of excitement?). But overall, she was spectacular. Like with Teana, she started so strong, I really wanted to give her an A. But again, like with Teana, she didn’t 100 percent stick the landing. Regardless, I’m majorly looking forward to hearing more from both of them.

Jordan Kirkdorffer, “In Case You Didn’t Know” (Team Blake) — Grade: D+ | This Nashville accountant, whose intro package revealed a hilarious childhood mullet, put the job he loves on hold to try out for The Voice. Unfortunately, when he started singing, I thought he wouldn’t have to take too much more time off. His performance was too overwrought from the get-go and just… how to put this… not super pleasant to listen to. So leave it to Adam to be the first to turn his chair. Jordan seems like a nice fellow, just not an amazing singer. On Team Blake, he’ll never survive his Battle.

Shana Halligan, “Bang Bang (My Baby Shot Me Down)” (Team Alicia) — Grade: B- | I wanted to love this daughter of one of the founding members of Blood, Sweat & Tears when I heard her haunting take on Cher’s classic. I just couldn’t, though. There was something very artificial about her stage presence. It felt to me like she was playing someone who was feeling a song as opposed to just being someone who was feeling a song. Totally dug Shana’s inventive song interpretation and liked her unusual voice, just didn’t really like, well, her. 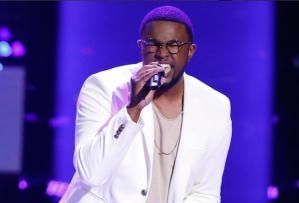 Gary Edwards, “What’s Going On” (Team Adam) — Grade: B | This 26-year-old Texan told us in his how-do-ya-do segment that he sings in church but is looking for a bigger stage. From his opening notes, I suspected that he was about to find it. His voice has a creamy, hard-to-resist quality, and it lost none of its appeal as he went for the Marvin Gaye classic’s bigger notes — you know, the ones Blake described as inviting Gary to punch us in the face, vocally speaking.

Hannah Goebel, “If I Ain’t Got You” (Team Kelly) — Grade: A- | Nope, I can’t bring myself to say that this 20-year-old Nebraskan was brave to cover Alicia in front of Alicia — she had to know going in that she had this shizz in the bag. From line 1, Hannah’s smooth, assured vocal made me feel like I’d been transported from my couch to a jazz club. And when she swung for the fence, her belting was even more impressive. So my biggest criticism is more of a suggestion: She shouldn’t bounce so much during future performances. Why make it harder than it has to be to keep a smooth vocal smooth, right?

So, who did you think gave the best Blind Audition of Night 5? Is there anyone on Team Adam that you’re especially jazzed about? Miya? Drew Cole? While you contemplate, vote for the evening’s standout below.