Every season on iZombie, there’s one brain that stands out above the rest. This year’s memorable noggin comes during this Monday’s episode (The CW, 9/8c) when the undead heroine feeds off a hopeless romantic. Suddenly, the medical examiner’s life becomes a romantic comedy movie, complete with meet-cutes set to a popular ’90s love song.

“It’s one of my favorite [episodes]. It’s a two-parter episode, so we get a lot of” this particular brain and its accompanying movie tropes, star Rose McIver previewed during TVLine’s set visit. “We see things in slow motion… It makes a lot of great references to the films I grew up loving,” some of which — Bridget Jones’s Diary, Notting Hill and The First Wives Club, to name a few — the actress watched to prep for the rom-com adventure.

Overcome by her emotions, a flighty Liv even falls for a suspect (guest star Sam Huntington), who she thinks is The One, as seen in the exclusive video below. But Clive reminds her that her future soulmate may end up being a future inmate. (Click PLAY to watch the sneak peek, then scroll down to keep reading.)

Co-star Aly Michalka also called the “hilarious” brain one of her favorites of the season and singled out a memorable love-struck moment. “There is a scene where [Liv is] easily just falling for men all over the place,” Michalka 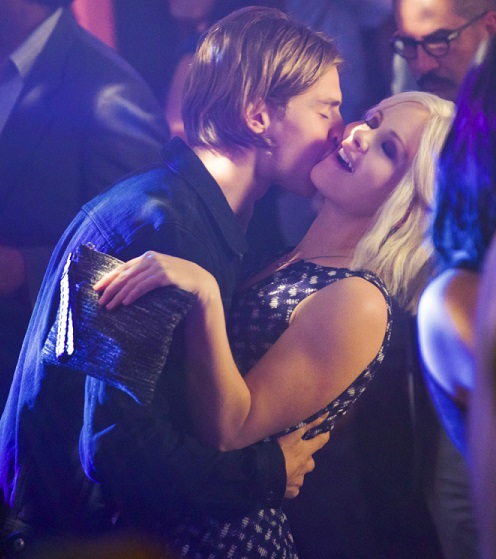 shared. “She’s falling in love just instantly, and there’s a really funny interaction between [Peyton and Ravi], where we’re watching her just, like, rampantly make out with this guy. We’re kind of disgusted, because in her mind, it’s this super romantic, beautiful kiss, but in real life, it’s gross and sloppy and everyone just, like, licking each other’s faces. Rahul [Kohli] and I just looked at each other, and were like, ‘OK. Yeah. This is happening.’ But it’s a really funny brain. I think it’s one of our strongest episodes we’ve done this year.”

While Liv is in a love-fueled haze, her ex Major is on professional wrestler brain. “I swung for the fences on this one,” Robert Buckley said. “I tried to even go bigger than teenage girl brain, which is pretty easy if you watch wrestling at all… It’s not hard. You kind of have to go big. So that was a ton of fun.”

So what do the his-and-hers brains look like side-by-side? “When she’s having her ‘Truly Madly Deeply’ moments, I’m screaming at the top of my lungs and gesticulating wildly,” Buckley described.