A whole lot of tears were shed on Monday’s American Idol — and not just by the lady who completely lost her faculties at the mere sight of host Ryan Seacrest.

She may have also been the same woman who admitted to naming her (now dead) goldfish after him, but honestly, I don’t remember. In fact, I’ll try every day for the rest of my life to forget that the exchange ever happened.

But enough about my issues. The second night of auditions for ABC’s inaugural Idol season delivered an evening of (mostly) unforgettable performances, including a previous Idol contestant who returned at half the size — and with twice the determination!

On that note, let’s discuss the 14 most memorable (for better or worse) auditions from Night 2: 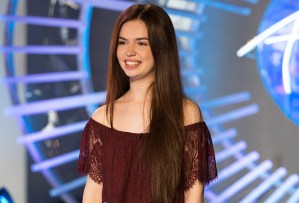 MARA JUSTINE, 15 | This New Jersey native, whose casual resemblance to Cheryl Blossom reminded me that I still have last week’s episode of Riverdale waiting on my DVR, nabbed the night’s first golden ticket with a solid performance of Rihanna’s “Love on the Brain” — which starts out exactly like “O Holy Night,” and I’ll fight anyone who tries to tell me otherwise.

ANDREW WEAVER, 16 | Carrying on the grand Idol tradition of White Guys Playing Guitars™, this Georgian gentleman crooned his way into the judges’ hearts with a smooth cover of Ed Sheeran’s “Thinking Out Loud.”

CHRISTINA JONES, 18 | This Illinois native blew the judges’ minds with her powerful, effortless performance — though Bryan couldn’t get his mind off of her braces. “Do you have braces on right now? With rubber bands?!” (Honestly, it was like that scene in Bambi when he encounters a butterfly; I’m now convinced that Bryan has never seen braces before.)

WILLIAM CASSANOVA, 26 | One contestant can say he kissed Perry. Another can say he danced with her. But only one contestant — this Washington, D.C., women’s shoe salesman — can say he got to touch one of her oft-Googled feet. His silky smoov rendition of “A Song For You” earned him a well-deserved golden ticket, foot-delivered by Perry herself.

MICHELLE SUSSETT, 22 | I won’t lie, I was convinced this audition was destined to go down in flames when Bryan failed to pronounced “Venezuela” correctly — like, even remotely correctly — but the second Sussett began her performance of Selena’s “Techno Cumbia,” my doubts immediately subsided. (My doubts about Bryan’s grasp on international geography, however, remain intact.)

MISHA GONTAR, 26 | The first major “no” of the evening was handed to Mr. Gontar, whom Bryan boldly dubbed “The Busta Rhymes of the Ukraine.” (Richie rightfully called him out on his nonsense.) Honestly, I was looking down at my laptop when Gontar’s audition started, and I didn’t even realize the show had come back from commercial. Music it was not. 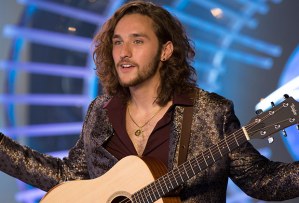 BRANDON DIAZ, 21 | Dubbed “the best male singer we’ve seen so far” by Perry (who also predicted that he’d wind up in the Top 10), this Berkeley College of Music student tickled the judges’ collective fancy with a gorgeous performance of Alan Stone’s “Unaware.” Even Richie admitted that he nearly had to excuse himself over his sexy falsetto.

TREVOR HOLMES, 27 | First things first: If this guy’s girlfriend goes missing anytime in the next few months, the police need look no further than Perry’s basement. We met Holmes after being informed — by the male judges, interestingly enough — that Perry is “single” and “lonely” and practically using this show as “her own eHarmony.” (I feel like Perry would sooner sign up for Tinder than eHarmony, but we’ll save that debate for another day.) Anyway, this was the stage set for Holmes — a songwriter who works part-time in construction to help his mother, who’s living with Lupus — and while he may not have blown the judges away with his musicianship, there was no way this pretty package wasn’t being sent directly to Hollywood.

LAINE HARDY, 17 | This gator-hunting, “gas-burning” Louisiana native may be soft-spoken, but — and I don’t use this word lightly — yowza! Accurately dubbed a “young Elvis” by the slack-jawed judges, Hardy let loose a powerful rasp and had the trio instantly eating out of the palm of his hand. 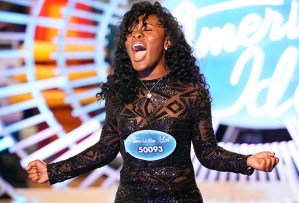 GABBII JONES, 20 | From the moment Jones entered the audition room, literally glittering from head to toe, you knew she was guaranteed a golden ticket. But a hug from Richie as a thank-you for crushing Ariana Grande’s “Dangerous Woman”? That was a surprise. (Also surprising was Richie telling her, “The basic core of you is exciting.” Wait, he can see into people’s basic cores now?!)

THADDEUS JOHNSON, 25 | If this fella looked familiar to any longtime Idol viewers, it’s because this wasn’t his first time at the rodeo. He was only 17 when he auditioned (and made it pretty far) in 2010, after which he fell into a pretty serious depression. After dropping more than 150 pounds, Johnson waltzed into the audition room on Monday’s episode and absolutely destroyed Swedish House Mafia’s “Don’t You Worry, Child,” earning him a golden ticket — and the second hug from Richie. (Yes, I’m keeping count.)

RISSA WATSON, 17 | If Adele’s Spidey sense tingled tonight — she’s got it, all celebrities do — it was probably because of this Oklahoma native’s chilling performance of “When We Were Young.” And I’m not exaggerating, Perry literally got “full-body chills” from it. (Bryan wasn’t a huge fan of Watson’s guitar skills, but whatever.) 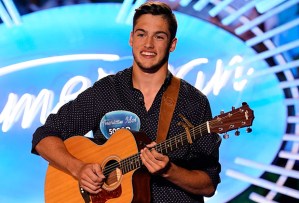 GARRETT JACOBS, 17 | I’ll be honest: The more Jacobs’ grandma talked him up, the less I thought he was going to live up to expectations. (I’m pretty sure grandmothers are legally required to believe that the sun shines out of their grandchildren’s butts.) But Jacobs, with the voice of an angel and the eyebrows of a telenovela star, ended up deserving that golden ticket — and not just because, as Bryan pointed out, he’s “badass” and “beautiful.” But, you know, that didn’t hurt.

DAVID FRANCISCO, 25 | Remember the audition I mentioned earlier, the one that reduced Perry to a human puddle? ABC saved that one for last, introducing us to Francisco, who was hit by a car — and paralyzed from the waist down — just three weeks after moving to Nashville to pursue a career in music. He brought along his girlfriend, an old friend with whom he reconnected after his accident, and delivered the heartbreaking rendition of Stevie Wonder’s “Isn’t She Lovely.” At this point, if you could still see your television through your wet, blurry vision, you’re a stronger person than me.

Which of these (or other) auditions did you most enjoy? Have any of the judges grown on you since last night’s premiere? Drop a comment with your thoughts on Monday’s episode below.