Sunday’s episode of The Walking Dead may have emphasized the walking over the dead, but it still advanced, however slightly, some key plots. Such as… Though Eugene wasn’t proving to be faster than a speeding bullet in his new role as ammo manufacturer, he still gave Negan what the residents of Whoville might have called (and the residents of the Hilltop might soon call) “a wonderful, awful idea”; Tara and Henry feebly fought their thirst for vengeance (with one of them giving in to it entirely); Gabriel and Maggie got new outlooks on life (his much bleaker than hers); and yet another character died what was a hero’s death, a fool’s or a little bit of both. Who was the casualty of the week? Read on and find out…

‘WE’RE ON THE RIGHT PATH EVEN IF WE’RE ON THE WRONG ROAD’ | As “Dead or Alive Or” began, some Saviors discussing via walkie-talkie Gabriel and Carson’s flight from the Sanctuary were overheard by Daryl, who was leading a group of refugees from Alexandria, among them Tara, Rosita, Siddiq, Judith, Tobin and moving target Dwight (who, if you’d told me a season or two ago I’d have felt anything but disdain for, I’d have laughed in your face — I mean, I loved Denise. Loved her!). Lest we forget that Tara wanted her girlfriend’s killer killed sooner than later, she right off the bat let him nearly get taken down by a walker (and, foreshadowing be damned, we were, like, minutes into the hour). From there, we cut to runaways Gabriel and Carson, who though lost as f— were still OK, the preacher insisted. “Just have some faith!” Mind you, at that very moment, their car had stalled, and a walker was crawling toward it. So the doc’s plea for Jesus — the Biblical Jesus, not the annoying one who wants to braid the hair of every Savior he meets — to take the damn wheel already probably coulda gone without saying! Nonetheless, before either of them could decide, “The hell with this!” Gabriel, half blind from his infection, went wandering into the woods after a “bell” that he heard, and the two of them destroyed someone’s flimsy mesh fence.

Back in the woods with Daryl’s group, while Merle’s bro, aka the most merciless camp counselor ever, pushed his troupe to the point of exhaustion, Tara, reduced to a single motivation, questioned whether there was “a reason [Dwight]’s still breathing.” Yes, replied Rosita. Duh — he might know s— that could help. Besides, she added, Carl just died, so we can’t kill off any more series regulars for a while. Right on cue, the dead man walking suggested that the group go through the swamp to avoid the Saviors. Negan, Dwight explained, had thought the route was too dangerous, so his crew wouldn’t wade in. And another thing, Dwight added, “I know how this ends.” He just wanted to help take down Sherry’s “husband” before he became a resident of “Argh!” City. Finally, Daryl weighed in: The swamp, it was. Though Dwight offered to assist in dispatching soggy walkers, Daryl ixnayed the notion — no way was he letting his nemesis have his crossbow. So Daryl, Siddiq and Rosita cleared a path through the Frogger screen full of walker booby traps. By and by, Tara threw a knife to — maybe at? — Dwight, inviting him to help handle the land walkers. “I don’t expect you to forgive me,” he said. But he was still sorry (almost as sorry as us) about Denise. Whatever, she basically said before opening fire. Killing him wouldn’t bring her lost love back, but “it’s gonna make me feel a helluva lot better.” Just when Tara had Dwight cornered, some Saviors happened by, and he intervened. Without giving up his would-be murderer or the other Alexandrian refugees, the turncoat inquired after Laura (the one Savior who knew he’d switched sides but was MIA) and led away the threat. Afterward, Daryl was livid yet had difficulty describing what he’d ultimately do to Dwight in front of Lil’ Ass-Kicker. 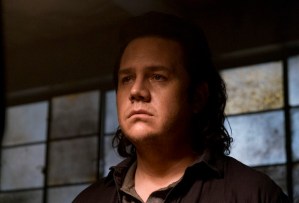 ‘TWO FLUSHES AND OUT THE PIPE!’ | At the Sanctuary, Negan terrorized Eugene by promising that, once Gabriel and Carson were dragged back, he’d find out how they’d escaped in the first place. When the former Alexandrian inquired about what had transpired in his old community, the Saviors’ leader sensibly asked, in his familiar, halting style, “Do… you… care, Eugene?” The brainiac, Negan said, had tastier morsels on his plate — for instance, his own outpost, where he’d make the bullets to supply his boss with “the necessary bang bang” to settle the score with Rick. If Lucille’s bloodlust didn’t do the trick and a mass murder of “resources” was necessary, Negan clarified, “That’ll be on them, not you, not me.” And why wasn’t Eugene celebrating his promotion, given that Frankie and Tanya would be on hand to tend to his every need? He still had one important question: “Will there be wine?” (I guffawed at this, only to be reminded by someone close to me that, uh, that would be my first and only question, too. Point taken.)

Meanwhile, at the “safe” shack, Gabriel went on and on about how it hadn’t been luck that had led him and Carson there, it had been… you know, George Burns. The preacher’s argument that there had been divine intervention only got louder when the two of them discovered that the shack’s owner, a zombified radio operator, had left behind a stash of antibiotics — perfect to treat the holy roller’s infection. “This man may have just saved your life,” marveled the doc. Alas, it appeared that nothing was going to save Gabriel’s eyesight — he might have permanent vision damage. Nonetheless, he was babbling on about faith this and faith that when he knocked over a knicknack that revealed a car key and a map. “In your face, non-believers!” he miraculously refrained from saying. But on the way to their new getaway vehicle, Gabriel’s immediately-enhanced sense of hearing directed him to a sign warning of traps… which he read too late to keep Carson from strolling straight into one. Though the reverend managed to shoot — semi-blind! — a walker that attacked the doc, they were still apprehended by the Saviors, and doh! Carson was killed after grabbing one of their abductors’ guns. (So much for Gabriel’s plan to get the doc to Maggie. Guess Siddiq will end up delivering little Glenn or Glenda when the baby arrives sometime circa Season 14… ) 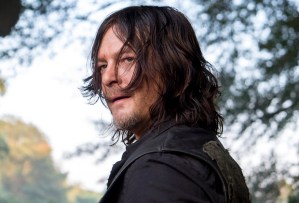 ‘MY PEOPLE COME FIRST’ | At the Hilltop, Jared complained that “the kid is creeping people out.” But Henry remained single-minded, demanding to know which of the prisoners had offed Benjamin. Morgan argued to Carol that Henry, bloodthirsty or not, would be fine, just fine, because he knew how to survive. But Carol, being a more established series regular and the show’s appointed Voice of Reason, shut that s— down by suggesting that neither Morgan nor the kid were OK. (Maybe some time over on Fear the Walking Dead will put the spring back in Morgan’s step?) Nearby, Maggie learned that the Hilltop needed to cut rations by a third to make it through a week — and that was not including food for the prisoners. Yikes! There probably wasn’t any wine, either! At exactly the wrong moment, which seems to be his special talent, Gregory pointed out that his behavior had been “pretty good” lately. So had others’, Alden noted. Alas, Maggie wouldn’t be allowing any of them to become free-range hostages anytime soon. And regardless of what Alden thought, “I don’t have a choice,” she added. When at last Daryl arrived at the Hilltop with news of Carl’s demise, Maggie comforted a distraught Enid, and Morgan decided to lie to Henry that Gavin was his brother’s killer, so the kid could turn down to “simmer” the homicidal rage burning in his eyes. Over at Eugene’s new outpost, the bulletmaker presented himself as a douche with a capital D to Frankie, treating her like a waitress and noting that his “brow will soon be in need of wiping.”

Just when Mullethead was starting to (again) seem way too big for his britches, in came Negan with Gabriel. According to the preacher, it had been Carson who was behind their flight. “I am agog,” said Eugene, sincerely since he was sure his goose was cooked. When Negan pressed smarty-pants to work faster, Eugene recommended he employ “traumatic theatrics,” a suggestion that left the villain inspired. “I do believe a rose just sprang out of that pile of s—,” he said. Which couldn’t possibly be good. Once semi-alone with Eugene, a morose Gabriel lamented his fate: He wasn’t to get Carson to Maggie, he was merely to sort Negan’s bullet casings. As the episode drew to a close, Maggie, perhaps having asked herself, “What would Carl do?” had a change of heart about prisoner conditions and gave the order to allow them to be taken out of their pen occasionally. When Gregory countered that maybe instead they should just evacuate, Maggie, once again high off the renewed potential of her community, advised him to get a grip. “Look around,” she said as Rick rolled up to the gates. “How can we lose?” 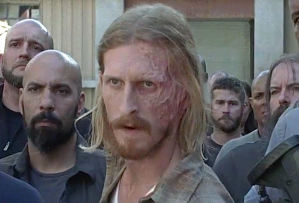 ‘NO MORE SMASHIN’ AND BASHIN’ WITH THIS’ | At the same time, at the Sanctuary, Negan was reminding his audience of Dwight and whomever he could still intimidate that a single nip from a walker could get anyone, like it or not, to join the undead club. But, he wondered, could they use that to their advantage? Turned out, it was a rhetorical question. Of course they could! Which meant that he could convince the Hilltop to toe the line no matter if they were “dead or alive [or] some kinda s— in between!” (Personally, I wasn’t clear on whether he planned to go around tapping Hilltoppers on the shoulder with walker guts on Lucille, or poisoning them with walker innards, or what… Whatever his plot, it promised to be the opposite of pleasant.) So, what did you think of the episode? My take: 1. I’m stunned that I feel remotely bad for Dwight, and 2. I hate that at every turning point (i.e. Jadis), the show turns away altogether and focuses on some other story. Your thoughts?