Sunday’s season premiere of The Royals began with a (fortunate) near-miss — and ended with a (most unfortunate) direct hit.

Picking up immediately where last season’s cliffhanger left off, Liam turned to Cyrus for help exposing Robert, only to be greeted by a shot from his uncle’s pistol. (We can all be thankful for his terrible aim.) Still, the feuding family members agreed to put aside their differences in order to take down a common enemy, resulting in an unlikely — not to mention hard-partying — partnership.

With his uncle’s help, Liam was able to seduce the daughter of the banker believed to have transferred money — more specifically, payment for Simon’s murder — from Robert to Ted, but because Liam was born with a conscience (his one flaw!), he began to have second thoughts about playing with people’s emotions. 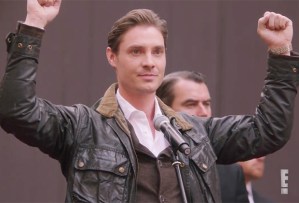 Robert, meanwhile, has no qualms about such activities, reminding Willow that she remains at the top of his to-marry list, even though he’s clearly only doing it to make Liam miserable. I can’t even say I was worried when someone tried to kill him after making a speech in South London — only disappointed when it was revealed that Jasper took the bullet, instead.

Of course, Robert wasn’t the only Henstridge who found himself in mortal danger this week; Princess Eleanor’s international business trip — to open a chain of hotels called, I kid you not, Hoteleanor — took an unfortunate turn when someone tried to kill her during a jaunty nighttime stroll.

TVLine spoke with Max Brown (aka King Robert) about his character’s villain status, as well as how Jasper’s shooting will affect the story moving forward:

TVLINE | When we met Robert last season, he was bearded and isolated on a beach. Did it feel better to start this season as the King of England?
Very much so, yeah. Right up until the end of last season, you didn’t quite know whether he was going to become king. Someone could have stepped in and changed the rules, as they often do on our show. So to start this season at the top of the food chain in the royal family was a lot of fun.

TVLINE | The promos are hinting at a villainous turn for Robert, but I didn’t get much of that in the premiere. Will it be a gradual progression?
Even a villainous character, I think, has his reasons for doing what he’s doing. Robert is a very moralistic character. In his head, he’s lining up his hand of cards as he sees appropriate. He’s living by his own code, which he thinks is the right way to be. Whether other people judge that to be villainous, I’m not sure. We’ll see how the Loyals take to the new season.

TVLINE | Given everything he’s been through, I feel like no one can tell him how to live his life.
Exactly, and that’s what’s interesting about this season. You get a touch on why Robert is driven the way he is and what influenced his characteristics. You’ll get a lot more insight into that, which was also fun for me to discover.

TVLINE | Random question, but as a British man, is it daunting to play the King of England? I’m just thinking about what it would be like for me to play the President of the United States.
I should say it’s daunting, shouldn’t I? [Laughs] Coming from my humble beginnings as a man in Shrewsbury, it’s a little daunting to play the head of the royal family, but it’s such a wonderful show and the character is so great to play. The whole crew takes the daunting-ness out of it. I do have a lot of speeches this season, though, so it’s been a lot to learn.

TVLINE | Speaking of making speeches, that last scene was nuts. I imagine this assassination attempt will have an effect on Robert moving forward?
Yeah, and the way we shot that was incredible. We had about 300 background artists working all day and they gave their all. Our director had me stand up and start doing the speech with them reacting however they wanted, as loudly as they wanted. It really gave the scene this energy that was fantastic. I’m excited for people to see where that storyline goes. There are always twists and turns on this show, as you know.

TVLINE | What about Jasper? Robert wasn’t a big fan of his, but will that change now that he’s literally taken a bullet for him?
Yeah, I think Robert will give him a second chance to a certain degree. But again, even that relationship will have some intense twists and turns along the way. Robert is very protective over his sister, so dating the help doesn’t stand well in Robert’s code of conduct. Jasper still has a lot to prove; saving Robert’s life isn’t necessarily enough.

TVLINE | We’ve seen in promos that Robert will be at odds with most of the characters this season. Which of his relationships will surprise us the most?
There’s a lady that he meets, and I think it’ll show a side to Robert that will help the audience understand him a bit more. You’ll see a side of him that will surprise people — and hopefully redeem some of the naughtier decisions he makes.