Timeless returns for Season 2 this Sunday (NBC, 10/9c) with a new lease on life after defying cancellation, and the show isn’t wasting a minute of its second chance.

As soon as the premiere starts, the Time Team is rocked by a chaotic turn of events. “When we pick up, we think that maybe Lucy has joined Rittenhouse” following the revelation that her mother Carol is part of the Big Bad group, star Abigail Spencer previews. Meanwhile, Wyatt and Rufus are awaiting Lucy’s arrival when “Mason Industries blows up, and here we are — boom — they’re in an underground silo, and Lucy’s been trapped at Rittenhouse for about six weeks.”

In keeping with the changes, the season’s first time-travel adventure is actually a Rittenhouse mission to World War I, where Lucy, Carol and Emma are in search of a specific soldier (played by UnREAL‘s Michael Rady). “It’s fun because it’s the first time that we’ve had an all-female [group] going back in time,” Spencer says. Back in the present, Wyatt and Rufus embark on their own journey to “get Lucy back, but has Lucy joined the dark side? We don’t know.”

The time trip also introduces viewers to physicist and chemist Marie Curie and her daughter Irene, who “have a really sordid relationship, too. It’s very reflective of Carol and Lucy’s relationship,” Spencer adds.

Read on for scoop about Wyatt’s feelings for Lucy, Jiya’s troubling visions and the mysterious Garcia Flynn. 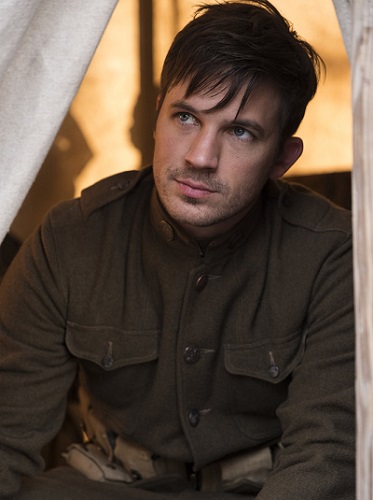 WYATT/LUCY | After failing to prevent his wife Jessica’s death, Wyatt has realized that “history is what it is, and he’s not going to be able to change it no matter what, and he let that go at the end of last season, and starts accepting this new reality that includes Lucy,” Matt Lanter describes. The soldier is “moving on… and being open to all things in the future.” But of course, there are complications to the potential romance, like Lucy’s mom being the enemy, which will “come back into play in their relationship,” the actor says.

RUFUS/JIYA | Jiya’s condition has not improved since last February’s finale. “She’s still having visions,” Claudia Doumit reveals. “She’s still having seizures, and she does not want to address it. She knows it’s a problem, but she thinks if she ignores it, it will go away, which is not the case. They become more and more apparent and aggressive.” And that could spell bad news for a certain couple, because “the more [the visions are] happening, the more Rufus and Jiya are forced to deal with them,” Malcolm Barrett shares. “They have to deal with who they talk to about it and how they handle it, and they wind up disagreeing, and that causes some tension that tests their relationship.”

GARCIA FLYNN | The Time Team’s Season 1 antagonist is definitely not out of the picture… but he is taking on a new role. Even though he feels betrayed by Lucy, “some friendships — or maybe that’s too big of a word — some uneasy alliances might be created, and they might be fighting the same enemy,” Goran Višnjić teases.