Marvel’s Agents of S.H.I.E.L.D. with its 100th episode delivered some very bad news that, in the end, was at least briefly offset by something beautiful.

When last we tuned in, an explosion in the Lighthouse basement blew up three Kree monoliths, which created a “rip” in what was best described as a “fear dimension.” That allowed past adversaries such as Lash, Hive and LMD Simmons to give our heroes a scare. To neuter the threat, Coulson volunteered himself for what as possibly a suicide mission to the fearsome cellar — seeing as he is already dying. 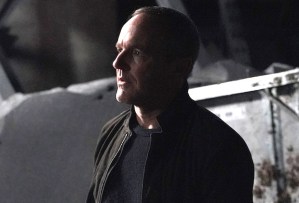 Coulson explained to the team that his brief stint as Ghost Rider “burned through whatever alien voodoo” had been holding him together, ever since he was resurrected after being fatally stabbed by Loki (in The Avengers). He is now slowly dying, and there is no known way to reverse or even abate the condition. So, after getting a concerned earful from both Daisy and May — and after securing a promise from Fitz — Coulson braved the basement, where he was met by (what appeared to be) Mike Peterson. The subject of the team’s first case tried to convince Phil that he was actually still on the operating table after being run through with Loki’s scepter, that his experiences of the past five years were merely triggered by the procedure being done on his brain.

Luckily, Coulson saw through the charade, vanquished assorted enemies (with help from the real Deathlok) and slapped a high-tech Band-Aid on the rift. Afterward, he met a nervous Fitz on the elevator, which, we eventually realized, was delivering them to the 27th floor’s beautiful forest (Deke can explain it!), where Simmons in a wedding dress awaited her groom.

As Coulson presided over the star-crossed couple’s (kilt-free) vows, Deke related to Deathlok how he ran an errand earlier to round up some reinforcements as well as the happy couple’s wedding bands. The one he picked for Simmons, he explained, looked just like his grandmother’s — a thinly veiled hint at his lineage that was then confirmed by General Hale getting a DNA report on the mysterious, non-existent Mr. Shaw.

In the wake of soooo much happening  — and after suggesting they give Iain De Caestecker a spot bonus for throwing us off the wedding scent just last week — TVLine invited S.H.I.E.L.D. co-showrunners Jed Whedon and Maurissa Tancharoen, and executive producer Jeff Bell, to tease what’s ahead. 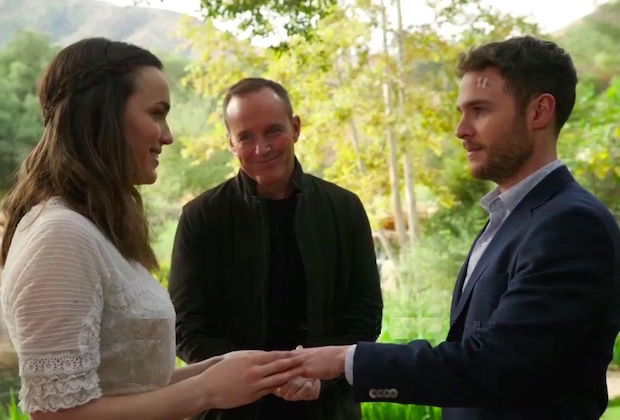 TVLINE | When Vancouver’s superhero shows can barely film on location without 100 fans tweeting spoilery pictures, how did you manage to film the FitzSimmons wedding outdoors and not have word leak out?
MAURISSA TANCHAROEN | It’s called “Marvel Security.” [Laughs] No, it was filmed at a very remote location [in Placerita Canyon].
JEFF BELL | Everybody on our cast and crew in general, partly because we’re terrified of Marvel, does a great job of keeping things quiet. If your character is going to die, if some big twist is going to happen, they do a very good job protecting it.

TVLINE | Talk about coming up with the “fear dimension” storytelling device for this milestone episode.
JED WHEDON | One of the ideas was to keep our team together and have them only facing their internal demons, not to have some outside threat. It was more about a “pressure cooker” featuring our people.
BELL | It was also a way for us to do “Greatest Hits,” without just doing clips of, “Wow! Remember when…?” It was a way to remind the audience of people and things we dealt with in the past, and who we’ve become. And with respect to Coulson, it really questioned everything that has happened for the last 100 episodes. 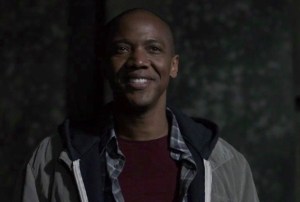 TVLINE | Was there anybody you couldn’t get or decided not to use, like Kasius, Dichen Lachman (who played Skye’s mother Jiaying) or, dare to dream, Loki?
WHEDON | You know, we ended up getting exactly who we wanted.
BELL | The beautiful thing about J. August [Richards returning] as Mike Peterson is that was our first case as S.H.I.E.L.D. agents. It really launched the show. And the fact that he came back as both Mike Peterson and as Deathlok was a lot of fun for us.
TANCHAROEN |  It was a way to bring it full circle.

TVLINE | “Fake Mike” I imagine represented Coulson’s “fear” that these incredible five years, where he formed this family, was just a dream.
TANCHAROEN | Absolutely. That’s exactly how to view it.

TVLINE | I loved the way you first revealed Deke’s connection to Fitz and Simmons. Is that something for only the audience to know, or does the fact that Hale knows, too, mean the information will fall into other hands before the season is over?
BELL |  What we like about the way we did it is it’s fun right now for the fans to know, but the characters don’t, because that will inform how everything is viewed. Our characters can go about being completely oblivious. It’s the same as if there was a bomb under the seat and the audience knew but the characters didn’t. It brings a richness and texture and complexity to scenes that might seem fairly mundane.
TANCHAROEN | And also, by confirming that Deke is related to Fitz and Simmons, fans of that relationship not only are rewarded by seeing their wedding but by the promise that their legacy continues. 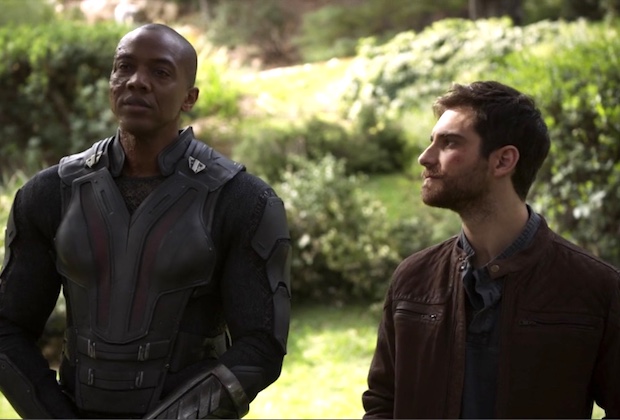 TVLINE | I have to say, the conversation between Deke and Deathlok during the wedding ranks as one of the most MCU-like moments you have ever delivered. You had these second bananas, off to the side and serving as the peanut gallery during a major moment. It felt straight out of an Avengers movie.
TANCHAROEN | Well, Jed had the great idea that at every wedding there are those awkward dudes who are just sitting there, like, not really focusing on what’s going on and just shooting the s–t.
WHEDON | I think it’s safe to say that Jeff Bell and I have both been that awkward dude at many weddings. [Laughs]
BELL | Our ongoing joke is, “Bride’s side or groom’s side…?”

TVLINE | Is Coulson going to power through his compromised condition, or will we see him a bit hobbled?
TANCHAROEN | That’s a good question…. I mean, though he has accepted his fate, he says, “I’m not in any hurry [to die],” so…. Knowing Coulson, he’ll power through.

TVLINE | Because it’d be a downer to see him regularly “pull over” to catch his breath.
TANCHAROEN | Yeah. I don’t think Clark [Gregg] would be into doing that either!

TVLINE | We got a taste of it in the 100th episode, but how will Coulson’s situation affect May moving forward?
WHEDON | I think that both May and Daisy are pretty attached to Coulson — I mean, everybody is, but them especially….
TANCHAROEN | Everyone is going to rally around him, but those two, specifically, will do their best to make sure that [his death] doesn’t happen.

TVLINE | How soon might we see Yo-Yo with some sort of “arms”?
TANCHAROEN | You won’t have to wait very long.
WHEDON | She’s going to be in the mix, so… she’ll have to have something.

TVLINE | Is Daisy’s journey now about her accepting this greater responsibility that Coulson envisions for her?
WHEDON | That’s some of it. She’s dealing with the fact that people say she destroyed the world — and she’s not stoked about that.
BELL | When you get the bad news that you’re the “Destroyer of Worlds,” you’re going to want to do something about it!
WHEDON | But I don’t think that she’s going to let Coulson give up his post as leader easily. She clearly doesn’t feel like she’s ready, so we’ll see how that manifests — whether or not she is, or whether or not she finds some other way out of this.