The three-time Emmy winner has not one, but two critically acclaimed series returning this month, beginning with Season 2 of Amazon’s Sneaky Pete, which drops all 10 episodes on Friday. Martindale junkies will then get their next fix on Wednesday, March 28, when FX’s The Americans kicks off its sixth and final season.

Memories From the Set: Margo Martindale 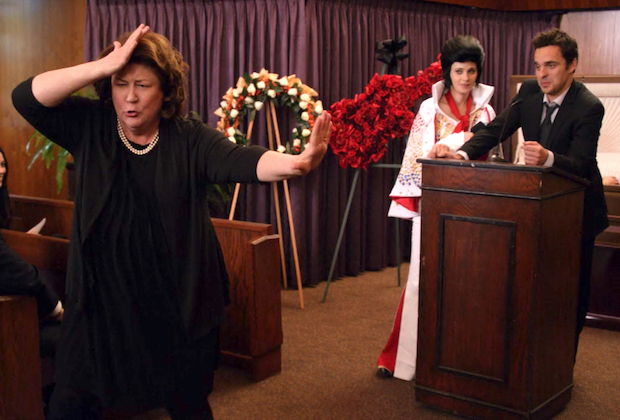 On Pete, Martindale plays Audrey Bernhardt, the matriarch of a family that has unwittingly invited conman Marius Josipovic (Giovanni Ribisi) into their home, believing him to be their estranged grandson named — you guessed it! — Pete. The series reunites her with former Justified boss Graham Yost, who came on board as showrunner after the pilot. She describes it as the happiest of coincidences.

“I was at Sundance promoting a couple of movies, and [co-creator] Bryan [Cranston] called me,” Martindale tells TVLine. “He said, ‘We haven’t signed this guy yet, but we think you’re going to be really happy,’ and I thought, [whispers] ‘It’s Graham Yost!'”

Pete‘s second season is a big one for Audrey, who is struggling to move on following the accidental murder of Det. Winslow, the dirty cop who went after Pete—err, Marius, during Season 1. The confidence man, meanwhile, is forced to go looking for Audrey’s estranged daughter Maggie (aka the real Pete’s mother, played by Twin Peaks‘ Jane Adams) after two goons show up claiming she stole $11 million from their mysterious employer.

In the lead-up to both returns, we invited Martindale to wax nostalgic about some of her past (and still present) gigs. Flip through the attached gallery to see what she has to say about working on The Americans, BoJack Horseman, Dexter, New Girl and more.