This Thursday on Gotham (Fox, 8/7c), The Penguin has a real joker on his hands, as he learns the current lay of the land inside Arkham Asylum.

Oswald of course is no stranger to Arkham, but this time he finds himself behind bars for fraudulent reasons — fingered for the (non-)death of orphan boy Martin. But on top of that injustice, he must contend with the  chaos personified that is Jerome Valeska, who fancies the asylum his personal playpen. 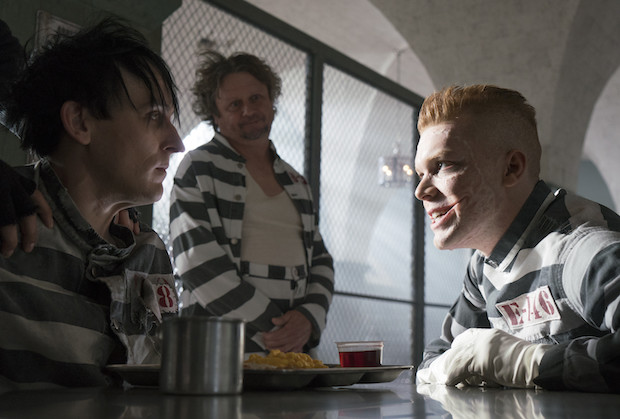 TVLINE | What pray tell is the Oswald/ Jerome dynamic going to be like? What are they going to want from each other?
You have Jerome (played by Cameron Monaghan), who is chaos, and you have Oswald, who is control. So you can imagine, there are ways that those can integrate, but at the same time they’re opposites. It’s a really intricate dance that they both have to do, to figure each other out. Oswald is at his lowest of the low, and it has extra significance this time because he’s innocent! He didn’t do anything. I mean, relative to Oswald he was a good person. [Laughs] He did the right thing [faking Martin’s death], so to find himself still betrayed, still back in Arkham, everything he has worked for taken away due to false pretenses…. It’s just devastating to him. When we come back, we see him in that state. And now he has to contend with Jerome, who essentially runs Arkham. It’s his playpen.

TVLINE | And you two have never even had a scene together before, right?
Cameron and I? No, we haven’t. We’ve never interacted. And this was something the two of us have been talking about, since Season 1. There’s a really exciting dynamic to explore. But Oswald definitely recognizes him from when he was on the news, and they have that connection through [Theo] Galavan, too.

TVLINE | Does Oswald hold Jerome in any “professional” regard? Or does he dismiss him as a loose cannon? Like, “You’re sloppy.”
I think it’s terrifying for him, actually. He finds himself in Arkham, under the control of a madman, and there’s no angle he can work. There’s no potential outlet that he can use to gain control. It’s too far gone, so it’s really, really terrifying to Oswald. His focus from the second he’s there is to get. out. — whatever it takes.

TVLINE | He’s burned all his damn bridges.
One would think! But…. 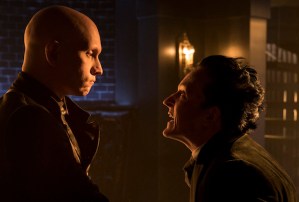 TVLINE | Who is Oswald most angry with, stuck there behind bars?
He’s most angry with Zsasz (Anthony Carrigan); he’s a huge part of it. And obviously Sofia (Crystal Reed); he’s directed all of his anger at her.

TVLINE | Zsasz playing dumb about the “dead” kid…. That betrayal hurt, man.
Oswald is angry at Sofia; I think he’s just more heartbroken by Zsasz, to be honest. He’s the reason Oswald is there. And also, Oswald knows that its really Sofia that has done this, but for her to be able to take a career criminal like Zsasz and turn him into a f–king rat? That takes talent. 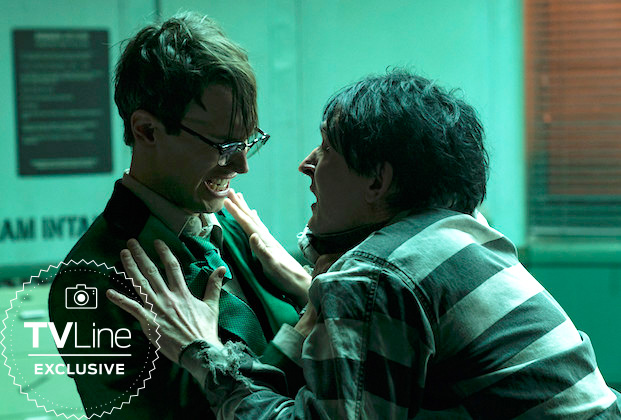 TVLINE | What other characters will you be interacting with?
The Riddler and the Penguin (Cory Michael Smith) come back into each other’s lives, and it’s a really, really great moment. And it’s unexpected; I don’t think people will expect the way this happens. (See exclusive photo above from the March 15 episode.) It also kind of shows one of my favorite things about the show, which is that these characters take the lessons and the experiences of the past and they change and they grow and they evolve, as the years go on.

Everything that happened between the Riddler and the Penguin last year that broke them apart, t changed who they are, so they are different when they come back together. And that’s why I think it’s unexpected but it gives our show a groundedness and a reality. Like, things aren’t just tossed away. The characters remember the people that have hurt them. It’s bingeable TV!