For Chicago P.D.‘s 100th episode, the Intelligence unit is putting their friends at Chicago Fire undercover.

The two-night crossover, kicking off Wednesday night with P.D. (NBC, 10/9c) and continuing Thursday with Fire (NBC, 10/9c), finds paramedics Dawson and Brett signing up to help with a case. Antonio and Voight promise to have the women’s backs, but some members of the firehouse still have concerns about the potentially dangerous plan, as seen in the exclusive sneak peek posted above.

Read on as showrunners Rick Eid (P.D.) and Derek Haas (Fire) preview the franchise’s “most integrated” crossover yet, a Halstead wish come true and more.

TVLINE | At this point, you’ve done several crossovers between the shows. How is this one different?
RICK EID | This is my first crossover, so I can’t speak from experience. But I feel like this one might be the most integrated, where it’s truly a two-hour story that integrates all the characters. It’s not a hand-off. It’s more a two-hour story that combines the elements of Chicago P.D. and Chicago Fire.
DEREK HAAS | When we [started], we didn’t know how to do them, so we would do a regular episode, and in the last five minutes, we would tack on the outlier that would take it to the next show. On this one, when we realized P.D. was going to be on Wednesday night, and Fire was going to be on Thursday night, so we needed to start the story on P.D. — usually, we have to catch the bad guy at the end of the P.D. episode — we thought, “Why don’t we just do one story that’s two hours long?” It’s not even a “Part 1” and a “Part 2.” It’s just really like a movie. We do have a big cliffhanger at the end of the first hour that bridges the gap into the next one. But it, for sure, is the most cast-mixed of all of them, where you’re seeing your favorites from Chicago Fire in that first hour, just integrated throughout and seamlessly… In the second hour, it’s the same thing. There are scenes in the second hour that only have P.D. characters in them. It was so much fun making this one. 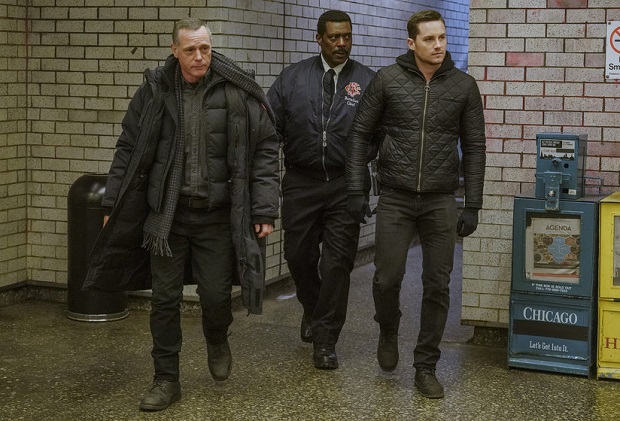 TVLINE | Plot-wise, what’s the storyline?
EID | There’s a man on the loose in Chicago, and he’s blowing up people. He’s targeting people in the media. The story, we come to learn, gets into the world of fake news and some of the negative effects fake news can have on people. This guy had enough.

TVLINE | How does the Fire team come into play?
HAAS | Right from the jump in the P.D. hour, Platt is being interviewed on one of those morning talk show kind of things about police activity, and then there’s an explosion, and the fire department comes in. Of course, when it’s Trudy Platt, Mouch is going to be there. Severide comes. All of a sudden, we know someone’s using bombs in the city, and that incorporates both our fire department and our arson unit and P.D.‘s Intelligence unit as they’re trying to track down who this guy is.

TVLINE | One of the things we know already is that P.D.’s going to stage a stakeout in the firehouse.
HAAS | That’s fake news. [Laughs] We were in the kernel of that idea when we were first talking about doing the crossover. We did not go with that idea. [Instead], P.D. comes to our firehouse and says, “These paramedics actually treated a guy we need to get information from. Can we borrow Dawson and Brett? Can we get them to volunteer and go into, basically, the lion’s den and get some information for us?” Of course, Boden, Casey [and] Cruz are not happy with this plan because of who they care about and why they care about them. Dawson and Brett, who are fearless, as you know, readily volunteer. It’s a question of whether or not Voight can guarantee their safety when things don’t go as planned.

TVLINE | I’m surprised Antonio is OK with this plan, considering it’s his sister and on-and-off girlfriend.
HAAS | Antonio has a confidence level that’s… He thinks it’s going to be simple. “By the way, nothing will happen because I’m there. I’m right outside the door.” But sometimes, we’re wrong. 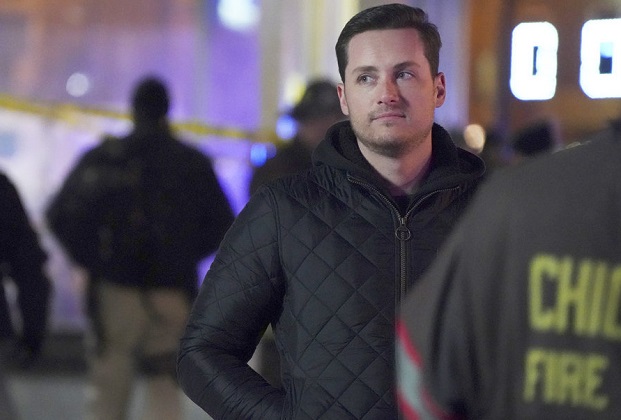 TVLINE | Are there any character pairings you haven’t gotten to explore in the past, or not as much as you would have liked, that you got to dig into with this crossover?
HAAS | Yes, Halstead and a motorcycle. I’ve been wanting to do it for a hundred episodes, and finally, Rick, he tried to get me to not do it. He was like, “Derek, I don’t know that America’s ready for this,” and I said, “I want Halstead on a motorcycle. The fans have demanded it. It’s happening!” [Laughs] So get ready for that one.

TVLINE | How integrated is Med into the crossover? I know it’s not one of the hours, but are there characters from Med who appear throughout?
HAAS | No. We were on weird schedules. It all has to do with when we can get on their stage. We actually have Med a lot in Fire this year, and I think you guys have been doing it quite a bit on P.D. But for this crossover, we just did P.D. and Fire.