This week’s episode of The CW’s The Flash lasts about 10 seconds — for the non-speedsters of Central City. But meanwhile, Barry Allen, Jesse Quick and Jay Garrick endure a prolonged battle to stop a nuclear bomb from decimating downtown!

In the episode “Enter Flashtime” (airing Tuesday at 8/7c), Barry teams with Jesse Quick and Jay Garrick to slow down time by using “Flashtime,” the same trick that Barry employed weeks ago in the courtroom to “freeze time” for him and Iris. TVLine invited returning guest star Violett Beane to explain how Flashtime works, reveal Jesse’s true reason for returning and then tease her “surprising” appearance on sister series Legends of Tomorrow.

TVLINE | What brings Jesse back to our Earth this week?
You know the whole Wells and Jesse strife? Because she made it so that he couldn’t be a part of his [Earth-Two] team anymore? Well, all of a sudden, out of nowhere, he sends her an Apology Cube.

TVLINE | Awwww.
Yeah, yeah. We’ve seen Jesse use the Breakup Cube, which is a way to not deal with complicated emotions. He sends an Apology Cube, but there’s nothing on it, so she comes to town like, “OK, what’s up?”

TVLINE | And at that point she gets pulled into this Flashtime experiment?
Yes — basically as they’re dealing with [Harry’s Apology Cube] a bomb goes off somewhere and immediately she and Flash jump into Flashtime and have to figure out how to stop it.

TVLINE | Flashtime is the same trick Barry used a few weeks ago, in the courtroom. Explain to me, Violett Beane, the principle upon which Flashtime works, because Barry didn’t quite sell us or Iris on it.
It’s essentially that we are running so quickly that everything else is standing still. It’s less about “freezing time” and more that our bodies and thoughts are moving so quickly that we’re able to essentially freeze time. And basically the whole episode is in Flashtime. It’s Barry and Jesse and eventually Jay [Garrick, played by John Wesley Shipp] trying to figure out how to stop this bomb. We think through a few different ways, and while this all happens over the course of a whole episode, it really transpires over 10 seconds in real time, maybe? It’s cool.

TVLINE | Are there any dangers to using Flashtime? Anything they need to be cognizant of?
A speedster only has so much energy. One thing you see is that even speedsters can’t run in Flashtime forever, so…. 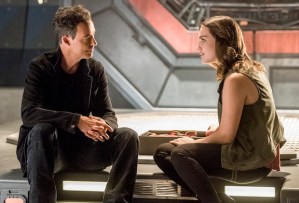 TVLINE | What else can you say about the episode? I see Barry and Iris having some heart-to-hearts in the production stills….
Yep, there’s some of that, some WestAllen business. For Jesse in particular, she comes to town for her Dad, so what he’s apologizing for is [SPOILER REDACTED]. There are some really touching moments that Tom [Cavanagh] and I shot together that I’m excited for everyone to see.

TVLINE | I have to say, it’s kind of cool how you’ve had a rich arc on this show, and you only pop up every couple of months. There’s been family drama, boyfriend drama, your evolution as a speedster, running things on your own Earth….
It’s great. I love being able to come back in, because it feels like no time has passed. It’s such a great experience 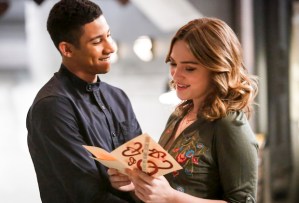 TVLINE | What can you say about your Legends of Tomorrow visit, airing March 19? Wally West (played by Keiynan Lonsdale) is now on that show. Did Jesse feel she owed him some face time?
There’s a bit of that…. You see Wally and Jesse together in a room, and things are not what you expect them to be. And… that’s about all I can say! [Laughs] It’s going to be cool and, I think, pretty surprising for the audience.

TVLINE | You’ve been pleasantly busy, recurring on The Resident and you just booked a pilot. Do you attribute part or much of that to your time on The Flash?
Oh, absolutely. Absolutely. I can never give enough praise to the producers and everyone I’ve worked with at Flash — just for being such a learning curve for me, and launching my career in a way. So, absolutely!