President Donald Trump began his Friday by tweeting about Saturday Night Live, because why the heck not?

POTUS took to social media to respond to a new Alec Baldwin interview in The Hollywood Reporter, in which the Emmy-winning impersonator — who has portrayed Trump on SNL since the fall of 2016 —  said “every time I do it now, it’s like agony.” In response, Trump blasted “Alex Baldwin” in a since deleted tweet: 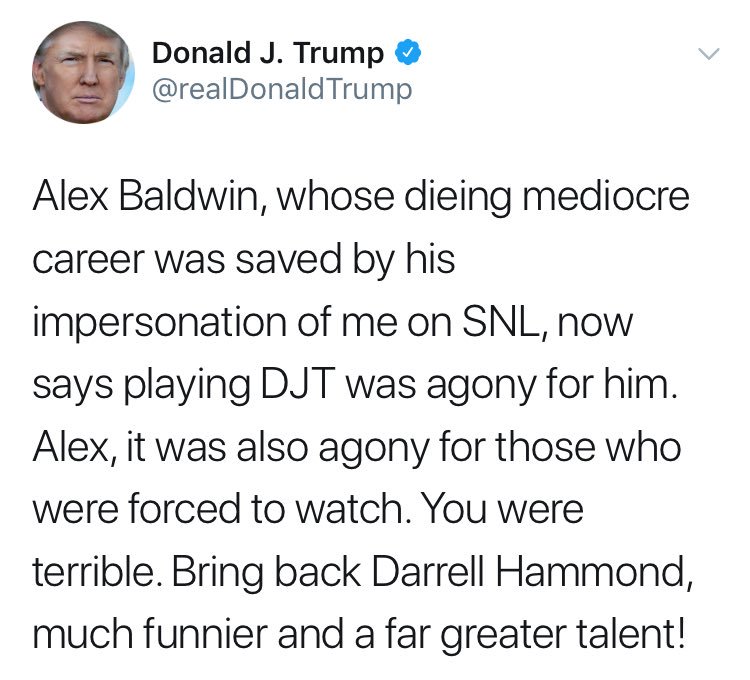 Shortly thereafter, Trump scolded Alec Baldwin, suggesting “it was also agony for those who were forced to watch,” and that SNL should bring back previous impersonator Darrell Hammond:

Alec Baldwin, whose dying mediocre career was saved by his terrible impersonation of me on SNL, now says playing me was agony. Alec, it was agony for those who were forced to watch. Bring back Darrell Hammond, funnier and a far greater talent!

Baldwin later subtweeted the president to tell him that he’s not going anywhere:

Agony though it may be, I’d like to hang in there for the impeachment hearings, the resignation speech, the farewell helicopter ride to Mara-A-Lago. You know. The Good Stuff. That we’ve all been waiting for.

And Mr President…
please ask your wife to stop calling me for SNL tickets.
(Hey, Melania…we’ve got Charles Barkley this Saturday!)

Baldwin has been putting in fewer appearances on SNL as of late. So far this year, he has only slipped on the bright orange wig once, popping up in the Feb. 3 episode hosted by Natalie Portman.