This week on Marvel’s Agents of S.H.I.E.L.D., the entire team found their way back “home,” via the Kree portal, but the welcome wagon that awaited them was… not so welcoming.

No, the S.H.I.E.L.D. agents are on everyone’s Most Wanted lists, so Priority One was laying low (or if you’re Daisy, keeping unwitting, Zima-chugging tag-along Deke out of trouble). That plan got shuttled, though, when they spotted an otherwordly light seemingly projecting from the sky down to Earth — akin to the story that Voss told in the future, of the events preceding Earth’s destruction. When Coulson & Co went to investigate, they realized it was a trap, set by General Hale with help from a compromised Piper. A masked woman then showed up with an attack team, which S.H.I.E.L.D. was somewhat able to hold off — though along the way, the masked woman hurled a razor-sharp chakram through the air, double-amputating Elena in the midst of some Yo-Yo-ing. Ack!

Viewers later learned that behind that mask is General Hale’s daughter Ruby, who in the cold open had presented herself as just a smart-mouthed teen. But now we know she is much more, and that her Quake poster-plastered bedroom is actually situated behind a steel door at Hale’s HQ. 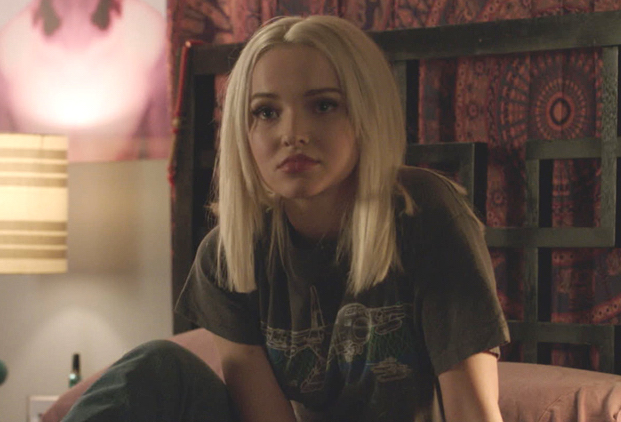 TVLINE | How did this role come about? Were you actively looking to change things up and do something drastically different?
You know, no, I wasn’t. I’ve never thought of myself as someone with an image and therefore I’ve never tried to change any perceived image that I have. I’ve just allllways wanted to do Marvel. Since the dawn of time, Marvel has been my favorite thing. Anything action-related, anything superhero, supervillian, has been a great interest to me since I was very small. I mean, I didn’t know anything going into this audition about who Ruby was going to be; it was very limited information, very limited sides. But it turned out to be something so incredible and exactly what I wanted to do in terms of acting. Because everything I do is not for any kind of image, it’s because I really want to do the roles.

TVLINE | Because it’s quite an unorthodox set-up they’ve got there with the bedroom.
Right, of course. [Laughs] I can’t really tell you much else, but she is her biological daughter.

TVLINE | Ruby was perturbed that Quake wasn’t there when she intercepted the others. If Quake had been there, what do you think Ruby’s plan was?
I don’t know if I can say yet. She’s definitely got an obsession with Quake; I don’t know if that’s out of adoration, if it’s something else. I think she doesn’t know what she would even really do if she saw Quake. It’s been a long time coming and she’s been very fixated on her…. What Ruby thinks is going to happen when she sees Quake might not be exactly what happens when she sees Quake.

TVLINE | How soon will we gain insight into Ruby’s motivations?
Pretty immediately. In the coming weeks, you will definitely understand how Ruby feels about Quake.

TVLINE | Maybe there will be some flashbacks to tell that story?
Actually, she pretty outright tells you. [Laughs]

TVLINE | I assume that was actually you in the mask there, during the fight…
Yes, it was….

TVLINE | So, talk about filming that sequence, because Natalia [Cordova-Buckley] simply devastated me with that look on her face after Yo-Yo’s arms got chopped off.
You know, Marvel Agents of S.H.I.E.L.D. is a very technical show, and they are great about fitting a lot of stunts into a very small amount of time. So it wasn’t really like a big, emotional day on set, as much as it was a very technical day on set. Also, I can’t really see anything through that mask, I’m not lying. I can’t see or really hear anything, but that was really me in the background there whole time, for, like, a 12-hour day. But Natalia had her own emotional journey, for sure. She had these “green screen arms” on, these little green sleeves…. [Laughs] It ends up looking so devastating and incredible in post[-production]. but it’s very, very technical in person. The show is so incredible to me, how they can do that.

TVLINE | Will we learn that your masked persona has a cool name?
Oh, no — she’s just Ruby! Ruby’s going out on her own. She’s a trained killer, really.

TVLINE | Lastly, will we see that she has any other skills besides throwing around the chakram? Is there, like, any hand-to-hand combat?
Ohhh, wow, for that you’re definitely going to have to wait until later on! But she’s a full-blown assassin, a killing machine. Anything that anyone on S.H.I.E.L.D. can do — obviously besides Quake — Ruby can do!