When is an episode of Grey’s Anatomy not just an episode of Grey’s Anatomy? When it’s also kinda-sorta partially an episode of the ABC drama’s spinoff, Station 19 (which premieres on Thursday, March 22). In “You Really Got a Hold On Me,” Ben and fellow firefighter Andy Herrera (Jaina Lee Ortiz) rolled up to Grey Sloan after saving two brothers from going up in smoke. Actually, make that “after mostly saving two brothers.” Turned out, Andy would have to take a hands-on approach with one of them until Meredith could work her magic in the O.R. Read on, and I’ll explain…

YOU LOOK 12; CAN YOU FIND A GROWNUP… ?’ | As the hour began, Alex and Amelia were worried about how they were going to treat Kimmy since they hadn’t gotten into the Grey Sloan Surgical Innovation Contest; Meredith was worried about convincing the doctor who owned her polymer patent to let her use it in her project; taking Harriet from Jackson, April piqued his concern by admitting that she was hungover; and cleared by Maggie to return to work, Bailey was eager to hit the O.R. Shortly, Ben arrived at Grey Sloan with the first of the aforementioned brothers and explained that their injuries were the result of a fiery chemistry experiment gone awry. While the youngster sweetly worried that his sibling would get in trouble with their mom, Warren asked that Mer and April hang back to wait for the second rig, as the other boy had been bleeding from the abdomen. In response, Andy had stuck her hand inside him! When not being dismissive of baby-faced Levi, Herrera learned — from Glasses, we might add — that she had in her hand the patient’s abdominal aorta. If she moved her hand even the teensiest bit, the kid wouldn’t be going into surgery, he’d be going to the morgue! (Side note: Ambulance rides not usually being super smooth, how on earth did she not already move her hand?)

Though Andy’s hand and arm were numb, she was game to maintain her position while the gurney was removed from the ambulance. (What choice did she have, really?) Of course, it was during this risky maneuver that the call came for Grey from the patent owner. Unable to take it, she heard from Taryn that the doc had not sounded happy. While Ben seemed to have difficulty keeping himself from doctoring brother No. 1, Mer distracted Andy from the predicament (and abdomen) she was in by telling her about the contest and “this old guy in Madrid” who holds the patent (which she needed to get fast, before April found out). Unwilling to head back to the station, Ben tried to “help” Andy, who instead sent him back to work. In the O.R., Mer freaked Andy out by having her actually pitch in with the surgery. “You run into fires,” Grey pointed out. “You can do this.” And, as a matter of fact, she did do it. Later, Andy marveled that Ben had done that — been a surgeon — and was giving it up. Explaining his reasoning, he recalled the time he’d cut open a patient with a clipboard and got in trouble for it. He wanted a job where he could do whatever it took to help someone, and that would be a positive thing. When again, Mer got the call from Madrid but couldn’t take it, Andy jumped in, speaking to him in Spanish. Meanwhile, Richard reminded Ben that he’d made his career choice, and if he wanted to be at Grey Sloan, he could be there in the waiting room. As the episode neared its end, Andy revealed to Mer that she had gotten Grey an appointment with her patent holder when he was in the States the following week, and Ben appeared to have made peace with having left behind his surgical career. 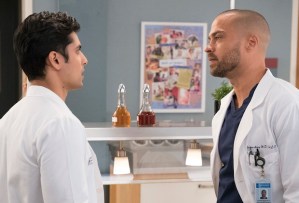 ‘IS THAT A FIREABLE OFFENSE?’ | Concerned about April, Jackson pumped for information Arizona, who advised him that Kepner wasn’t the same Kepner that she’d been with him, and she was trying to figure out how to be happy without him. So maaaybe he could just be happy for her. Later, in the cafeteria, Jackson learned from Arizona that Maggie was still dating Clive. He had a date that night himself, he said. Overhearing Vik and Levi joking about April, aka Dr. Party, Jackson stepped in and cut short his ex’s boy toy’s lunch break. When the hour’s ending neared, Avery asked his ex for coffee, admitting that he was worried about her. “You’re Harriet’s dad, you’re not mine,” she reminded him. That night, Arizona got a firsthand look at just how hard April was partying with the interns.

‘YOU’RE A TERRIBLE WINGMAN, ALVIN’ | Since Amelia and Alex’s experiments in hopes of helping Kimmy had failed, Amelia called in reinforcements in the form of her former mentor/hookup Koracick, who immediately wrote off Karev as Amelia’s team mascot. While he seemed mainly interested in coming on to Amelia, Sam got flustered since Koracick was an idol of hers, leading to a slight laser mishap. Bemused by the disaster, he cracked, “I can’t believe this project hasn’t been funded.” When Koracick noticed how hot Sam was, DeLuca accidentally made him notice how jealous he was. Later, DeLuca made the mistake of revealing the reason for Amelia’s rush with the project: Kimmy. Only, instead of be his usual obnoxious self, he hit it right off with the musical-theatre fan. Alas, “she’s got a few months to live,” he said, “if she’s lucky.” When he tried to bail, Amelia lit into him, and in the heat of their argument, an idea came to him that, against all odds, might give Kimmy a chance. “It’s brilliant,” he declared, then corrected himself. “I’m brilliant!” As the episode neared its conclusion, the first trial of Koracick’s idea wasn’t a resounding success, yet it showed some promise. (Plus, Alex did a mini-duet with Kimmy… aw!) 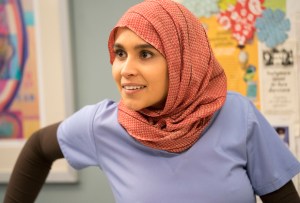 ‘MY VACATION IS OVER!’ | When fire boy No. 1 deliriously removed the object protruding from his leg, it started spurting blood dramatically. Since Owen had just left him with Dahlia, she had to think fast and took off her hijab to stop the bleeding. During surgery on the kid, Richard pushed Bailey to ease herself back in after her, ahem, vacation. Watching from the gallery, Ben did the same thing, and only succeeded in irritating his wife. When the kids’ mom arrived, Bailey forbade Dahlia from giving her an update — she was just an intern, after all. Miranda’s stress level rising, she finally admitted to the whole O.R. that she’d had a heart attack and insisted that she wouldn’t have come back to work if she hadn’t been able to handle it. Outside the O.R., Richard filled in the boys’ mom on their condition. When she broke down in tears, so did Dahlia. In the end, both brothers pulled through. Owen returned Dahlia’s cleaned hijab and complimented her on a job well done.

So, what did you think of the episode? Andy? Did this hour make you more or less likely to give Station 19 a try? Hit the comments.