Fox’s Gotham resumes Season 4 this Thursday at 8/7c, and from go Jim Gordon has his hands full.

For one thing, The Toy Maker has been hired to terminate “The Doc,” whom Jim doesn’t realize is Lee Thompkins’ Narrows-saving alter ego. On top of that, he’s still on the outs with Harvey, whom he succeeded as GCPD captain; the sticky Sofia sitch he has found himself in isn’t going away anytime soon; Alfred gets mixed up in something deadly after getting ousted by Bruce; and as Jim soon will realize, there’s a new(er) Ivy creeping around town.

Prior to Gotham‘s midseason premiere screening and panel Q&A at Tumblr’s NYC HQ this week, TVLine invited Ben McKenzie to weigh in on Jim’s assorted problems — and the plan to resolve them.

TVLINE | Now that you’re a few episodes into it, how is Jim’s role as captain wearing on him?
I think it just marks his ascension up the ladder of the GCPD. He’s in charge of other people more directly, whereas before he was sort of the de facto captain even if other people were captain. Often you end up corralling them and then morally if not physically leading them into danger, so now he’s—

TVLINE | Now he can more easily get done what he wants to get done.
Totally. I think Gotham’s a fun setting for deep irony, and one of the ironies here is that even though he gets this new title it actually, in a way, makes him even more needy for all of the help outside of the GCPD — like Sofia’s, for example. He sees how ineffectual it is to actually be in leadership with the GCPD. It doesn’t really get that much done, and he’s still kind of a man on an island, you know? There’s no scene in Gotham where he talks to other captains who are also like, “Yeah, let’s fight the good fight!” He’s still alone at the end of the day.

TVLINE | I was thinking that this kinda has to work out for him, because if he’s fated to be commissioner, he can’t keep falling backward.
Exactly. Exactly right. He’s got to keep stumbling onward. 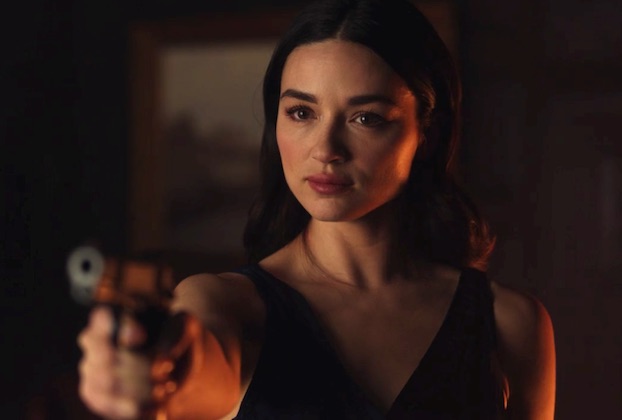 TVLINE | How is Jim possibly going to get himself out from under Sofia’s thumb? Is it about trying to find some kind of leverage against her?
Yeah, it probably doesn’t end well would be my guess. [Laughs] One of the stories we’re constantly telling on this show, but this is a new iteration, is sort of “Gotham as Greek tragedy.” You know the end before you began. You know the city ultimately has to fall apart to create Batman, and that Jim, as your lead character, will follow a similar character trajectory as he ascends into the hierarchy of the GCPD as the city is falling apart. Jim kind of has to lose in order for the fate of the city to manifest. So when he gets in bed with Sofia, literally and figuratively, he’s making his own bed that he’s going to have to extricate himself from, and that’s only going to further the guilt and burden he carries on his shoulders.

TVLINE | As an actor, were you in the loop all season long on the midseason finale’s big Sofia reveal?
More as a writer, really, because I was in the writers room at the beginning of the season when I wrote Episode 4, and I thought it was very helpful. I mean, you could certainly argue it the other way — some actors don’t want to know [where a story is going] — but I always like to know. I always like to be able to modulate my performance based on not just what’s happening now and what will happen the next episode and what’s happened before, but also what may happen six or seven episodes [ahead].

What was important for me was to have Jim’s need be so strong that he would go to a gangster, or a gangster’s daughter ultimately, and also get so caught up in the moment that he goes for it, both the deal and her, and then immediately regrets it and immediately can’t get out of it. It’s not like he didn’t see it coming on some level — like, on some level he only made a mistake for a brief moment, and then it was too late. 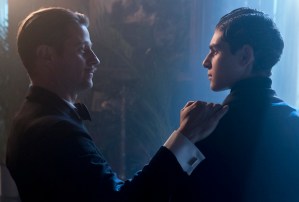 TVLINE | Will Jim get wind of Alfred and Bruce’s “breakup”? Because out of everyone else in town, he’s probably the most vested in those two sticking together.
Totally, and he’s the only other person really in Bruce’s life who can serve the role of mentor, right? Alfred is certainly No. 1, but Jim has also played somewhat that role. There was actually some of that in the episode that I wrote, a bit. We cut down one of the scenes between Jim and Alfred that I originally wrote longer, but it was Jim reading into Alfred’s freaking out about Bruce being gone and not knowing where he is and everything, and Jim saying basically, “He’s slipping away from you, isn’t he?” — which is something that I think almost any parent can relate to, when your kid’s gotten to a certain age….

TVLINE | My twins are 15 now and yeah, I’m going through that.
It’s natural, you know, on some level. It depends, some kids stay close to their parents forever, but I remember where I was at that age… But they cut [that longer Jim/Alfred] exchange], so it wasn’t in the episode.

TVLINE | What will it look like when Jim runs into emancipated, bratty Bruce? Might he have some words for him?
Yeah, they’re certainly at loggerheads for most of the season. There are maybe half a dozen fundamental relationships on the show, and certainly Jim and Bruce’s is one of them. It’s a crucial relationship, so you have to figure out how to navigate it slowly so that…

TVLINE | So that you always have somewhere to go.
You have somewhere to go, and you don’t want to get there too fast. They’ve had more interaction in this season than in the third [season], I would argue, but they’ve definitely been apart for much of it and have been at odds for much of it. If Bruce comes out of this phase where he’s partying and having a great time and comes back to who he actually is, and what he actually desires, Jim will be one of the people challenging him to actually accept that, and actually do the work that’s required.

TVLINE | Lastly, it seems just a matter of time until Jim learns what Lee has been up to, as “The Doc.” What do you think his reaction will be?
I think he’ll try to figure out what her angle is exactly, and yet there will probably also be a mixture of respect. It’s an interesting swing for her. He may not approve of it entirely, but on one level I would think he envies it in a way.