Celebrated actress Nanette Fabray, who won three Emmys during television’s Golden Age and played the grandmother on CBS’ One Day at a Time, has passed away; she was 97 years old.

Fabray died Thursday at her Palos Verdes home, according to our sister site Variety. Her performing career spanned seven decades: She started out as a studio ingenue in 1930s Hollywood films, and made her last television appearance as Fern in a 1993 episode of Golden Girls spinoff The Golden Palace. 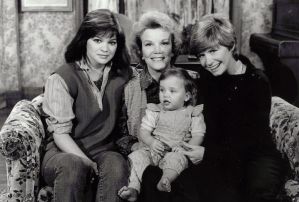 Working alongside legendary comedian Sid Caesar on the NBC sketch show Caesar’s Hour, Fabray won three Emmys in 1956-57. She later resurfaced as Mary Richards’ mother Dottie on The Mary Tyler Moore Show and as Ann Romano’s mother Katherine on the original One Day at a Time, where she appeared in a total of 42 episodes. Fabray was also a familiar face to ’70s game-show fans, often popping up as a celebrity panelist on Hollywood Squares and Match Game.

Fabray had a long career on the stage as well, winning a Tony Award in 1949 for her lead performance in the musical Love Life. She received a lifetime achievement award from the Screen Actors Guild in 1987.