Though we’ve been referring to Nashville‘s newest musical collaboration as The WAAG band, the show has yet to give Will, Avery, Alannah and Gunnar’s group an official name.

Until tonight’s midseason finale, that is.

Though we won’t spoil the name ahead of airtime (CMT, 9/8c), we thought you might like to hear how the band’s new handle came about. So when series stars Chris Carmack and Sam Palladio stopped by TVLine’s New York offices this week, we asked.

TVLINE | The new band gets a name this week. Did you all talk about how that came about?
CARMACK | More than you could possibly imagine.
PALLADIO | Oh my God. [Production has] got to jump through so many loopholes to end up with a name.
CARMACK | Because everything is a band name!
PALLADIO | Right.
CARMACK | [Gesturing to objects within reach] Table Tops! Sorry, can’t do it. Bottled Water! Sorry, it’s already a band. Picture Frames! Sorry, can’t do it.
PALLADIO | So the name that was printed in the scripts and went through all the loops that we had to then try our best to veto, the band was going to be called The Brilliant Ideas. That was the band name. 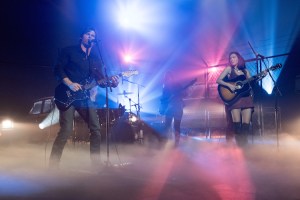 TVLINE | So you all brainstormed.
PALLADIO | Yes. It was Chris, myself, Jonathan [Jackson, who plays Avery] and Rainee [Blake, who plays Alannah]. We were sending group emails. Got a list together. Sent them to Marshall Herskovitz, our showrunner. “Hey dude, can any of these fit the bill?”
CARMACK | Originally, it was just an email saying, “Hey, can we have a couple of suggestions?” He was like, “You would not believe how hard it is.”
PALLADIO | So we took it on ourselves. And actually, [BAND NAME REDACTED] was one of mine. [Laughs] So Gunnar named the band, man!

What would you name Gunnar, Will, Avery and Alannah’s band? Hit the comments and let us know.