No, your eyes didn’t deceive you: You really did catch a glimpse of the most famous starship in the known universe at the end of Sunday’s Star Trek: Discovery finale.

After resolving the war between Starfleet and the Klingons, Burnham and the Discovery crew were headed to Vulcan to meet their new captain when they received a distress signal from a ship with a registry number starting with NCC-17. Yep, it was the USS Enterprise, captained by James T. Kirk’s predecessor Christopher Pike, and the season ended with the Discovery sitting face-to-face with the most celebrated vessel in Trek lore. (Along with a loving rendition of the original Trek series’ classic theme song played over the credits, we might add.)

After that enjoyable burst of Trekkie nostalgia, TVLine just had to chat with Discovery executive producers Gretchen J. Berg and Aaron Harberts about what that reveal means for Season 2 of the CBS All Access series, which is already in the works. Read on to hear about the chances we’ll see a young Spock (he was on the Enterprise before Kirk, you know!), and who definitely won’t be sitting in the Discovery‘s captain chair, when Season 2 blasts off.

TVLINE | Let’s start at the end, with the Enterprise reveal. What kind of storytelling avenues does that open up for you in Season 2?
AARON HARBERTS | I think one of the biggest things it’s going to allow us to do is start to develop how Discovery fits into canon. One of the big things that’s been polarizing for fans is, “We’ve never heard about Discovery! How does it fit? She’s related to Spock?” All those things. And what it’ll allow us to do is hit that straight-on. We see it as an exciting opportunity to say, “This is exactly how Discovery fits into the timeline. This is exactly how we can reconcile the choices we have made.” Because at this period in time, the Discovery and the Enterprise are the crown jewels in the fleet, so they should be face-to-face.

TVLINE | So does that mean Christopher Pike is a full-fledged character next season? Because we don’t know a lot about him, outside of “The Cage” and “The Menagerie.”
GRETCHEN J. BERG | Yeah, we can’t talk about specifics too much, but I think that because we are in canon, we look at things we know, and things we don’t know… and then there are the things we don’t know about the things we know! And there, often, you’ll find great opportunities for storytelling. But it is intriguing. It’s one of the fun things about playing within this box that is the timeline where we are.

HARBERTS | If there ever were to be a captain from canon that one could explore… Christopher Pike would certainly be that one.

TVLINE | So I guess you can’t tell us if we’ll see a ten-years-younger Spock next season, then?
BERG | [Laughs] No, we can’t!

HARBERTS | I can tell you: All you have to do is look at Michael Burnham and Sarek, and the look they exchange at the end of the show, and ask yourself what that could be about.

TVLINE | Maybe it’s safe to ask you about this: How great did it feel to lay down the old-school theme song over the closing credits?
HARBERTS | That was [executive producer] Akiva Goldsman’s idea. He is a huge Trek fan, and from the very beginning of his involvement in the show, he’s always been the guy who’s like, “And then the Discovery and the Enterprise will meet up!” And we’re like, “OK, Akiva, yes, yes…” [Laughs] It was his ultimate fanboy geekgasm… and it was a great idea. And then it was his idea to do the old theme at the end of the episode. I was at the scoring session, watching [composer] Jeff Russo lay that down. Tons of people were there, and you could have just heard a pin drop, and then there were smiles on everyone’s faces. It was very cool.

TVLINE | Oh, so that was totally re-recorded? That wasn’t just the original theme replayed?
HARBERTS | Oh yes, that was re-recorded. We had a vocalist come in. They had a bongo player in an isolation booth to play the bongo part. [Laughs] It was legit. 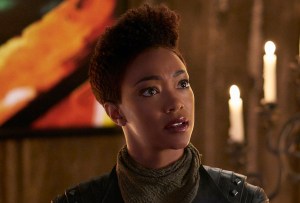 TVLINE | Burnham went through a lot this season. Where do you think she is, mentally and emotionally, at the end of Season 1 versus where she started?
BERG | I think she knows now that she doesn’t know as much as she thought she knew, for sure. At the beginning of the season, she thought she had it all figured out. I think it was very humbling what she went through. I think also, for a person who’s such a planner, when we met her at the beginning, she knew exactly her trajectory and what was happening. One of the things I really like about this season is, you never hear her feeling sorry for herself or yearning to be let back into Starfleet. And she still gets that. I love that about her character: In a lot of ways, on paper, she’s back exactly where she started, but she’s so not. If you watched Season 1, you know she’s not exactly where she started. As Captain Lorca says, “context is for kings.” You have to know the context for where people are, because it’s such an emotional journey, and a journey of self-growth, for all of our characters, but especially Michael.

TVLINE | With Tyler leaving and essentially breaking her heart, will we see a more guarded Burnham next season?
HARBERTS | Well, she is not someone to give her heart away willy-nilly, that’s for sure. But I think she also has realized just what loving someone brought her. So I think she’s going to be nursing wounds. But the important thing of her journey from Episode 1 to now is: She committed a mutiny on her own. She didn’t consolidate opinions. She didn’t gain consensus. It wasn’t that her strategy was wrong. Her way of going about it was wrong. And I think loving Ash, and forming a friendship with Tilly and Saru, made Michael Burnham realize that she needs people in her life. The benefit of having people in your life certainly outweighs the hurt that can sometimes come from that. Sarek’s words are going to ring true for her: “Never regret loving someone.” 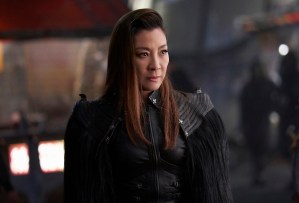 TVLINE | She and the mirror Georgiou really established a nice connection, didn’t they? Even though they were from different universes.
BERG | Yeah, I think so. They both had to come to the realization that even though they looked like the person who could fit the hole that was the shape of that person in their heart, they were different people. But they were still able to be there for each other and work together and find an appreciation for each other, for who they really were. I think there is a fondness, definitely. I mean, I don’t know if they want to be roommates. It’s not a Tilly-Burnham situation. [Laughs]

TVLINE | There’s always a chance she could run into Tyler and Georgiou again, right? It’s a big universe, but not that big.
HARBERTS | Oh yeah. One of our goals was: We wanted to create a universe, and play in that universe. And it’s only fun if you’ve got a cast of characters who can continue to come and go. 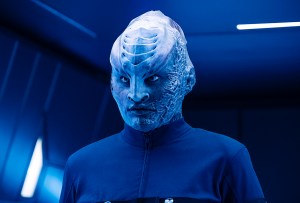 TVLINE | We saw L’Rell tame the Klingons for the time being, but are the Klingons still the primary antagonists next season?
HARBERTS | Well, we’ve got a lot of other story we want to tell, and for now, L’Rell and her presence and strength are going to help keep the Klingons in the position we need them in, which is to say: not at war with us. We love Mary Chieffo, and we love the character of L’Rell. She began as a character who exchanged a look with T’Kuvma from a lower battle deck in the pilot, and then ends up in the High Council chamber as sort of his torchbearer. That was by design. And when you have a character and an actor who are both so terrific… she’s important to us, and to our universe. We will see Klingons. I think it’s going to be slightly different from the way you saw them in Season 1. But yes, the Klingons have to be the Klingons. The question is: How easy is it for L’Rell to keep them behaving?

TVLINE | You did leave us hanging on who the next captain of the Discovery will be. What kind of personality type are you looking for to fill that spot?
BERG | Well, I don’t think we could bring back a Lorca [type] again, just because he was a captain perfect for wartime. I think the crew would be suspicious of that again. [Laughs] Discussing who’s next in that chair is a big topic in the writers’ room, and we certainly have landed somewhere… but I think we’d like you to stick around and watch and find out who it is, and why.

Your turn, Trekkies: Grade the Discovery finale and Season 1 in our polls below, then beam down to the comments to share your thoughts.