Constantine is getting his flirt on — but not everyone on Legends of Tomorrow is happy about it.

When actor Matt Ryan guests on the time-tripping CW series next Monday (at 8/7c), his demonologist alter ego hits it off with Wentworth Miller’s Citizen Cold — hey, you’re taken, Leo-X! — much to the comical annoyance of Mick Rory.

“Watching Citizen Cold and Trench Coat flirt with one another was, like, too much for Rory, so he just f–king got out of there,” Dominic Purcell shared during TVLine’s set visit last November. “It’s all too much! Too much information! Which makes it really funny. The scene is hysterical. We were all just on the floor laughing. So it’s all done in good fun.”

Constantine also makes an impression on the rest of the Waverider crew. Amaya “looks up to him” because of “his ballsy energy and his skills,” while her ex Nate “gets a little bit jealous,” co-star Maisie Richardson-Sellers revealed.

The character — whom Ryan first played on NBC’s short-lived series Constantine — is “such a different kind of male presence” for the CW drama, Richardson-Sellers added. “So it definitely shakes everyone up.” 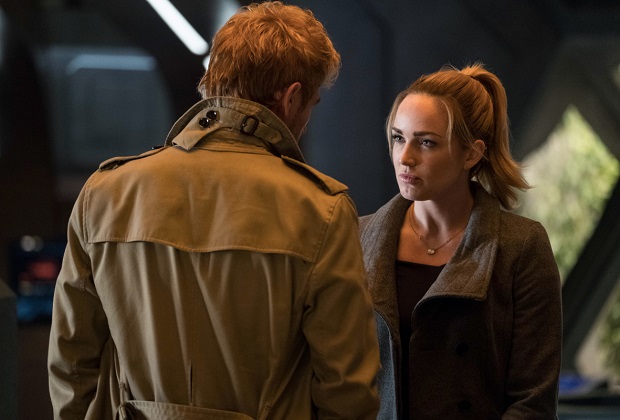 Of course, Sara already knows the demon hunter from when he helped rescue her soul on Arrow. But this time, the two actually have some non-possessed interaction. “He’s like this really cocky guy who thinks he is the ‘ish,'” leading lady Caity Lotz described. “I think Sara throws him for a loop because he thinks he’s all impressive, but then she [makes attack noise] takes everybody down.” Still, the actress believes that the visitor and the ship’s captain like and respect each other as “friends.”

When not sparking with the Legends, Constantine “brings some crucial storylines forward and plays an integral role… in helping Ray with some motivation or information that will really propel the second half of the season,” actor Brandon Routh previewed. Plus, the demonologist takes an interest in Zari’s amulet and “totems, in general, and what their meaning is,” co-star Tala Ashe teased. “He might be someone who can help with figuring out what that is.”

And the team sure could use some of that paranormal expertise that Constantine brings to the table. “Our season, thus far, has been heavily influenced by the supernatural and by magic, so it’s very appropriate to have him” aboard the Waverider, Routh noted.