The good news: Star Trek: Discovery‘s crew finally made it home from the mirror universe. The bad news: “Home” isn’t quite how they left it.

Stamets’ spore jump landed them back in the prime universe, but nine months later than they left, with the Klingons having decimated the Federation in their absence. Admiral Cornwell and Sarek board the Discovery and deliver a depressing status report: Starfleet is on the run, and the far-off Starbase 1 is their last remaining sanctuary. Oh, and Emperor Georgiou is still not happy Burnham transported her to this universe; upon seeing Saru, she taunts him that they just “dined on the entrails of your brethren.” Mirror Georgiou just makes friends everywhere she goes, doesn’t she? 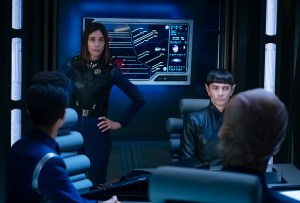 Burnham asks Cornwell to grant Emperor Georgiou political asylum — even though she knows it’s not her Georgiou, she can’t help feeling sympathy for her — but Cornwell says the Klingon war takes precedence, so Georgiou will have to remain their “guest” for now. And the war gets even worse when they arrive at Starbase 1… and find it taken over by Klingons, with thousands of human colleagues presumed dead. They turn to Georgiou for advice, since the Terran empire found a way to subdue the Klingons in her universe. Her recommendation: Attack the Klingons at the source — their home planet of Kronos.

They concoct a (kind of crazy) plan to use the Discovery‘s spore jump to leap into one of the massive caves below Kronos’ surface, where they can map the planet’s terrain undetected. They’ll need more spores, though, so Stamets uses their remaining mycelial stash to terraform a distant moon and grow a fresh crop. All they need, with Lorca gone, is a new captain, and Cornwell appoints one: Georgiou, dressed in her prime self’s old captain uniform, strides onto the bridge, with Cornwell announcing she was miraculously found alive. (Burnham and Saru know the truth, though.) Yeah, there’s no way this will backfire, right?

KLINGON-ING TO AN EX | Meanwhile, Lt. Tyler is recovered from his Klingon-extraction surgery and is (seemingly) back to his old self. He’s wracked with guilt about killing Culber and attacking Burnham — “I would do anything to undo what I’ve done” — but not everyone is eager to forgive. Stamets is furious when he runs into Tyler (“You killed a good man: the man that I loved”), and Burnham can’t even bring herself to see him. Tilly, ever the sweetheart, feels bad for Tyler, though, and joins him for lunch in the ship’s mess hall. 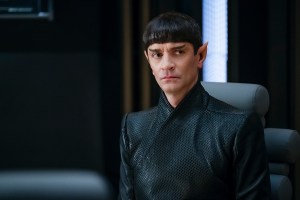 Sarek can sense his surrogate daughter is suffering, and encourages her not to reject the emotions she once felt for Tyler: “Do not regret loving someone, Michael.” So she reluctantly goes to see Tyler — though she instinctively backs away when he approaches. He insists Voq is gone, but she can’t trust him… and can’t forget how it felt when he had his hands wrapped around her throat. Tyler says she’s the reason he had the strength to get through this, and he can’t get back to being himself without her. He’ll have to, though: She walks out of the room, and out of his life. (Will he find a way to redeem himself, though, in next week’s big showdown with the Klingons?)

* I’m a little baffled by Admiral Cornwell’s decision to put the Federation’s best chance for survival in the hands of the bloodthirsty Emperor Georgiou. I know Georgiou offered inside knowledge of the Klingons in exchange for her freedom… but we’re really going to trust this maniac?

* The scene of the new spore crop growing on that distant moon was cool and all — it brought back fond memories of the Genesis device in Star Trek II — but I couldn’t help thinking: Are we literally watching grass grow right now?

* I did enjoy the Enterprise shout-out, with Cornwell saying their mission to Kronos would be the first time Starfleet set foot there since Captain Archer (!) did it a century earlier.

* It only took me 14 episodes, but I finally learned the name of the Discovery‘s female helmsman with the funky face scar. It’s Detmer, apparently.