With this Monday’s serving of Superior Donuts, series star and executive producer Jermaine Fowler makes his debut as a writer for the CBS sitcom, with an episode that aims to do right by Black History Month by calling into question what Fawz has been doing wrong.

And as part of that mission, Franco (played by Fowler) subjects the gang to a pop quiz about black historical figures, as seen in the sneak peek above. 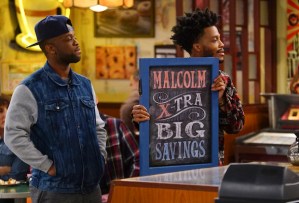 As evidenced by the inappropriately appropriating sign Franco finds outside the dry cleaning shop next door (see photo, left), Fawz (Maz Jobrani) tends to exploit Black History Month to make a buck. Franco first responds with the Black History quiz above, and later by introducing everyone to Wheels Langdon (guest star Bill Cobbs), a former Negro League baseball player who comes by to share his unsung story.