Lest you doubt the scope of Kerry Washington‘s talents, know this: The Scandal star is literally organizing her own character’s intervention.

Thursday’s episode (ABC, 9/8c) — in which Olivia Pope’s nearest and dearest lure her to Fitz’s Vermont abode for a serious sit-down — also marks Washington’s directorial debut, and TVLine has an exclusive behind-the-scenes look at the actress-turned-director in action.

Of course, not all of your Scandal favorites are invited to Liv’s intervention; back in our nation’s capital, Cyrus goes to Mellie with his own suspicions about Liv and Jake’s “extracurricular” activities  — and wouldn’t you know it, we also have a shot of Washington directing Jeff Perry (Cyrus) and Bellamy Young (Mellie) in Scandal‘s Oval Office: 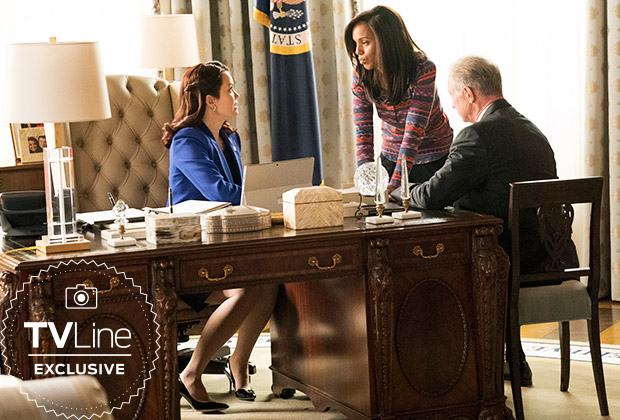 Once you’ve thoroughly perused the above photos, drop a comment with your hopes for Washington’s big episode below.

(Also, I’m giving myself extra points for not making an obvious joke about how Washington “handled” the episode.)