Another Star Trek: Discovery captain is dead… and the man behind him says it’s for good this time.

“There won’t be many more interviews about Lorca from now on, that’s for sure,” Jason Isaacs laughed when TVLine reached out to chat about Sunday’s climactic episode, which saw his Captain Lorca — who we learned last week was actually a mirror-universe doppelganger of the Lorca we thought we knew — meet his maker, courtesy of a sword through the chest from Georgiou, and a shove that sent him tumbling into the ship’s reactor to disintegrate.

Read on to hear from Isaacs about the origin of that jaw-dropping mirror-Lorca twist, how he accidentally spoiled it for some of his castmates (oops), the big hints the show has been dropping all season long about Lorca’s true identity, the perils of doing a fight scene with martial-arts legend Michelle Yeoh… and whether this is really the last we’ve seen of Captain Lorca. 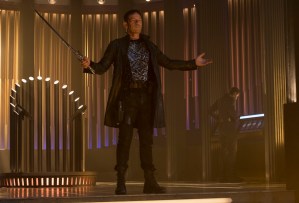 TVLINE | That was quite a twist with Lorca last week. How early on in the process did the writers let you in on his secret?
Before I took the job. I always knew that he was going to be from the mirror world, but we hadn’t quite sorted out exactly what he wanted, and how he planned on getting it. And I said, unhelpfully, to them: “I’m going to need those answers before I start, if I’m going to do this job.” And they went, “Fair enough.” We all sat together and discussed things, and we came up with a plan, and that was pretty much unchanged for the whole season. It’s the reason I took the job. I always knew he was going to be in it for one season, and I always knew he was going to try and get back to the mirror world, and I thought it would end with a big old martial-artsy showdown with Michelle and Sonequa [Martin-Green]. So anyone who watches it for a second time — or some of the Trekkies might watch it for a 50th time — you’ll see from the word “go”: It’s always apparent that he’s mirror Lorca. It’s just, you didn’t know what you were looking for.

TVLINE | Did the rest of the cast always know as well?
Funnily enough, I assumed that they did, but in fact, they didn’t. And I rather blew it for some people many months in, when I mentioned it. There was a horrified shock on some of their faces, and I realized I should’ve shut up. Sonequa knew. I think Michelle knew. But a lot of other people didn’t know, and I wish I hadn’t told them, because it would’ve come as more of a surprise. If I didn’t have scenes with them, particularly, because if I had scenes with them, they would’ve heard me discussing stuff with the directors about “Why would we do this?” or “He wouldn’t want to do that.” If they weren’t actually in those moments, they just didn’t know. I do remember one of the actresses just kind of dropping her drink in horror.

And it’s sad, because they realized what I realized from the beginning, which is: I’m not going to be around for years, and I’m not going to be hanging out with them. Because I adore them all. We very, very quickly became a family, much more than any other show I’ve ever been on. I missed them even when I left at the end of the season. And obviously, they are going to carry on this very long journey together, and I won’t be part of it. 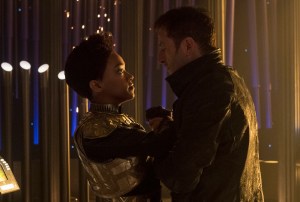 TVLINE | And like you said: There were hints all along about Lorca’s true identity, if you go back and watch?
Everywhere. It’s everywhere. You’re going to kick yourself and slap yourself red-faced. At every point, you can see it. First of all, why the hell do I reroute this prison ship and get this woman [Michael Burnham] on my ship, who I don’t know, who’s a mutineer? She’s smart and great, but there’s no reason at all to anoint her in that way, and give her this position and all this responsibility. And then to stretch the rules and allow her to go off with Sarek, and send her on all the missions… and then the spore jump, too. I’m pushing for these spore jumps because I’m mapping the universe, so I can find my way home. I pushed Stamets to do the 133 jumps, which is insanity, and likely to kill him.

Along the way, these things can ambiguously look like I’m either being particularly headstrong as a warrior, or noble and self-sacrificial. But really, it’s always about getting the ship ready, and priming Burnham so that she feels an irrational loyalty to me, and is happy to think outside the Federation box. One of the things I hadn’t reckoned with was how guilty she would feel about Georgiou, and how hard it was going to be to get her to think outside the box again. But I did pretty well. I got very, very close to achieving everything I wanted. Just the tiny little hurdle of being killed at the end. [Laughs] 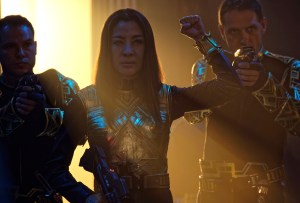 TVLINE | That final fight with Georgiou was epic. What was it like to duke it out with Michelle Yeoh?
Well, on one hand, obviously you’re having a fight with a martial-arts legend, which is a magnificent thing to do. On the other hand, it was scheduled for one day’s work, which means you don’t quite have the luxury… on a movie, that would be three weeks or a month to shoot that fight. And in rehearsals with Michelle Yeoh, a couple things became apparent: One is that she can move eight times faster than my eyes and head can register. [Laughs] And if it was going to look like a proper fight, I was going to have to up my game. And two is that she’s very delicate, and when I was squeezing her wrists or blocking her from punching me, I was fully blocking like I was fighting the Hulk, and she had these huge bruises. So I was crippled with shame. She was, of course, completely gracious about the whole thing.

But it wasn’t a surprise that she was brilliant. The surprise, actually, was Sonequa. A couple times when I was watching from a distance, I thought it was her stunt double, who is a brilliant fighter. Because Sonequa has perfect lines. It’s often about cleanliness in fights: Can you make these moves bold and clear? And she looked like she was a Nintendo fighting warrior. She was so good. And the challenge of it was twofold: One is that leather coat that I wear in the fight, that I wore for the last three episodes. It sounds like a pig caught in a mangle. It just squeaks the entire time. I had to replace every sound and every word I spoke while wearing it. So that was difficult. But the most important thing was for Sonequa and I to find a moment or two, however brief, that somehow paid off the relationship we’ve built up over the past six months, which somehow felt truthful to what Lorca wants. Lorca is hoping she’ll just give this up and rule with him, and she’ll be by his side. And sadly, fool that she is, she decided to kill me off instead. It could’ve been so much better.

TVLINE | Just to be clear: So you are gone for good? This is the end of your run on Star Trek?
Just to be clear, I haven’t told anybody the truth since I got this job, back in July. [Laughs] And if you ask me now what’s happening in the future, I wouldn’t rely on anything I say.

TVLINE | Isn’t it possible that the prime Lorca is still out there somewhere?
Well, do you really want to meet prime-beef Lorca when you’ve had the mirror world? [Laughs] The devil has all the best tunes. Or maybe he’s not that different. Maybe none of us are that different from the mirror versions of ourselves. It’s just a question of our attitude on the day. I have to say, quite often, particularly if I don’t have some caffeine in the morning, I am the mirror version of myself.

Got thoughts on Lorca’s (apparent) demise and where Star Trek: Discovery goes from here? Beam down to the comments.