An unconventional materials challenge on Thursday’s Project Runway All Stars resulted in some gorgeous creations — and some ugly behavior.

Like all good dramas, this one began… with deception! Alyssa Milano got the remaining 12 designers excited at the prospect of visiting a “castle” outside the city — only to surprise them with a damn bouncy castle in backyard of a country estate. Their collective excitement further plummeted when they realized they’d be using the balls inside the bouncy castle as material. (If for whatever reason you decided to take a shot every time someone said “balls,” it’s been nice knowing you.)

Save for the usual hustle of the workroom, the episode remained fairly light on drama… until the time came for the designers to explain their looks before the judges. When the panel accused Helen’s dress of being too “basic” and “neither flattering nor fashion forward,” she got defensive, throwing her fellow designers under the bus in the process.

“There’s no way there’s purple or orange going into this,” Helen said of her design, explaining that she didn’t want it to look “like a clown dress.” She added, “I cared more about execution and fit. It would be a cop-out to just hot glue [the materials] to muslin.”

Picking up on Helen’s sly critique of her fellow designers’ work, Isaac Mizrahi threw a “Shaaaade!” into the mix. And although he insisted he was “just teasing,” Helen replied, “Oh, they’ll take it personal.” And she was right.

“You said you didn’t want to make a clown dress, and you didn’t want to use orange or purple, which were the colors of the dresses next to you on the runway,” Fabio pointed out during a particularly tense discussion backstage. “You undermine everyone else to make yourself look better.”

“Why would I say anything rude about any of you people?” she asked, tears welling in her eyes. “Why would I do that?”

“Because you do it kind of often,” Anthony shyly interjected, to which Helen responded, “The last thing I would want to do is offend anybody” before taking some time to herself.

In fact, Helen was so busy collecting herself that she was late to the runway — though she arrived in time to see Stanley crowned this week’s winner: 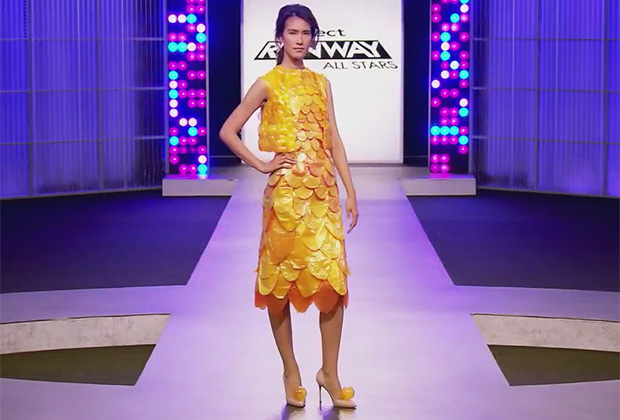 To add to Helen’s stress, she found herself in the bottom two, alongside Candice. Check out Helen’s (right) and Candice’s (left) looks below: 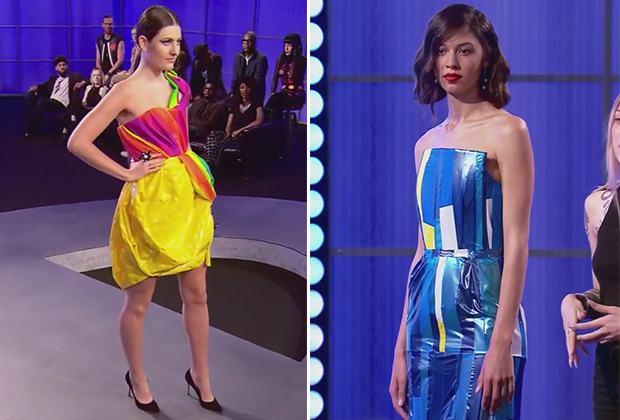 Despite the judges’ harsh words for Helen, however, it was Candice who was sent packing this week.

“I’m not sad,” she said. “I had a really great time. It’s not the worst challenge to go out on. And I love what I do, so I know I’ll be doing it for the rest of my life.”

Your thoughts on this week’s dramatic Runway? Drop ’em in a comment below.