Al Pacino has some tough questions to answer in his latest HBO biopic. 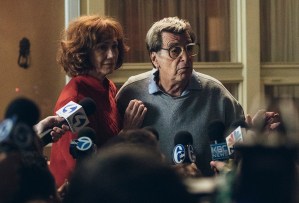 Pacino plays revered Penn State football coach Joe Paterno in the upcoming film, set to debut this spring, and in the first-look teaser above, we see Paterno’s final days as coach marred by the horrific sex-abuse scandal involving assistant coach Jerry Sandusky. The media descends on Paterno and the school, demanding answers, while students and boosters back their coach by chanting his name and rioting in the streets. Alongside a chilling shot of Sandusky putting his arm around a young boy, we hear a befuddled Paterno being asked: “Dad… did you know about Jerry?”

Press PLAY on the video above for a sneak peek at HBO’s Paterno, then tell us in the comments: Will you be watching?