As The Gifted‘s freshman run came to a close on Monday night, a mission gone awry led to a development that, when all was said and done, significantly shook up the ranks of the Mutant Underground.

The original plan seemed simple enough: Have the Frosts work their voodoo on a wealthy backer of the anti-mutant movement, so as to gain access to an event where Dr. Campell would be in attendance. Alas, when Marcos and Johnny portal’d inside and were about to abduct their target, Campbell shielded himself with some handy, small children. The Struckers meanwhile got word to Reed’s mother that the baddies would be coming after her for intel on a missing piece of Otto’s research. Before bidding her fam adieu to crash with a gal pal in Florida, Ellen told Reed and Caitlin that a “Madeleine Risman” used to collaborate with Otto.

With Campbell still in their crosshairs, two of the Frosts slipped away with Polaris, having gotten tipped that Campbell was set to jet off with Senator Montez. Back at HQ, with Johnny and Marcos busy chasing after Lorna, it was up to the Strucker family, along with any combat-trained mutants, to fend off Sentinel Services and paired Hounds, after a tracker mutant led them to the way station. They were barely able to do so, while Shatter and others teamed up below deck to tunnel a way out through the vault’s back wall. Once the passage was created, everyone slipped out, after which Andy and Lauren united their powers to obliterate the place.

Johnny, Marcos and Clarice meanwhile tracked Lorna to the airstrip where Campbell’s jet was about to take off, pleading with her not to bring the aircraft down — that taking innocent lives was “not why the X-Men chose us.” Lorna, though, argued that the X-Man “made a mistake” and that it is time to (as Dad might say) “make a new world” — and to that end, she ripped the engines off the jet as it passed overhead, leaving it to crash. Later, as the Mutant Underground reassembled at a Nashville way station, Lorna showed up to declare herself proudly Team Hellfire, and Esme invited any others to join in — which Sage, Fade, the superstrong dude with no name and, yes, Andy all did.

In the wake of the shake-up, TVLine invited show boss Matt Nix to assay the aftermath, explain one of the defections, and offer a glimpse at the recently ordered Season 2.

TVLINE | Before we get started, I wanted to say that I was glad to see the show get a Season 2 — because just you never know these days. The direction of these last four to five episodes in particular has been exciting.
Yeah, I was really excited because, like you, we really felt like we hit our stride in that last four or five episodes. It was like, “Please let us keep doing this, please!” 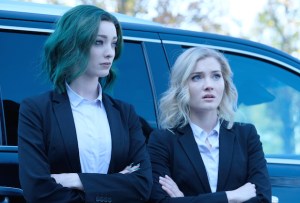 TVLINE | I like what you did with the finale. The story has kind of shifted from “us versus them” to “half of us versus the other half of us… versus them.” Is that kind of how you see it?
What was really important to all of us was this idea that even though, in a sense, these battle lines have been drawn, everybody on both sides cares about each other. Even the Frosts — they may be able to take or leave any individual person in the mutant underground, but they’re fundamentally fighting for mutants. I also like the idea that everybody has links to everybody else on the other side and they’re all fighting the same general enemy, but they want to go about it in very different ways.

TVLINE | One curious, smaller “defection,” I thought, was Sage. What was your thinking in her going to the other side?
I guess I can kind of answer that in two ways. One is that in the comics, Sage has always been, let’s say, “a morally flexible character” who’s been on various sides of different conflicts. And in terms of our characterization of her within the show, she’s always sort of given voice to the logical, based on what she sees on the computers. I like the idea that she’s the one who’s looking at this with a cold eye and saying, “You know, there are a lot more of them [fighting against mutants] than there are of us,” and when it came down to it, it was the Frosts that stopped the Hound program. She does have personal feelings and an attachment to the mutant underground, but she’s a creature of logic and that’s what leads her to flip.

TVLINE | When Season 2 opens, I have to imagine that in the public’s eye, Polaris bringing down that airplane did serious damage to the muties’ reputation.
Yeah, that’s a really big deal because our characters live in a world where this kind of thing doesn’t happen every day. Mutants killing a United States senator is a huge deal, and killing the lead scientist at Trask Industries brings its own host of problems. Going into next season they’ve created a whole new situation with regards to public opinion and politics, and they’re going to have to find a new way of living in this world. 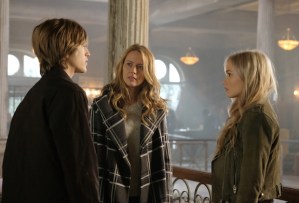 TVLINE | Andy, I thought, did kind of a hard left turn after Esme visited him at the Fairburn station. Should we be wondering if he is acting on his own volition, or if maybe the Frosts put a little “special something” in his noggin?
Something that we’ll get into is clarifying the Frosts’ power a bit. They say it themselves, that when people aren’t expecting them to do something and essentially they have the element of surprise over unprepared minds, they can do a lot in terms of control. But when I think about the Frosts, I think that the real power is if you can see into someone’s heart then you can be incredibly persuasive. You know their biggest fears, their biggest aspirations, their greatest loves… everything. It’s one thing if you’re doing what they do in Episode 10 and you know you’re just laying waste to unprepared [Trask guards] — that’ll work — but unless you’re going to be three identical triplet mutants hanging out with someone all the time, with glowing blue eyes…. I think they can put something in your mind that’ll echo there, but essentially once you leave them, if they haven’t been legitimately persuasive it doesn’t work. 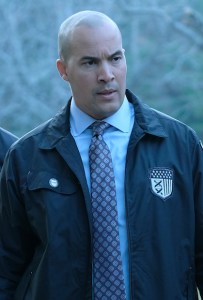 TVLINE | What will Agent Turner will be up to in Season 2? Having turned in his badge, is he kind of a free agent? Is he still in the mix?
Oh, yeah. He’s definitely still in the mix. At this point, the mutants, in his eyes, have taken everything from him and it’s still a cause that he’s dedicated to. So he needs to sort out exactly how he wants to continue this fight that is so important to him if he’s no longer under the umbrella of the Sentinel Services.

TVLINE | There’s almost a parallel where you have Hellfire versus the mutant underground, and you have pitted Turner’s way of dealing with the mutants against the government’s increasingly hardcore approach.
Also, as we showed at the beginning of Episode 11, the Purifiers add another whole segment of society and philosophy that’s more a sort of vigilante approach. One of the things we’re going to explore for Jace next season is how’s he going to carry on this fight and what’s going on with the Sentinel Services now that he’s no longer part of it. 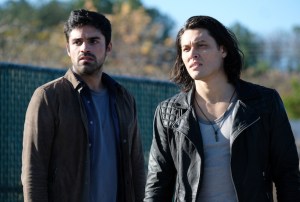 TVLINE | Without spoiling too much, what might a Season 2 episode look like now that you’ve split up the mutants?
One thing we’re going to see a lot more of is “mutants in the world.” The mutant underground doesn’t have giant, empty banks in supposedly contaminated waste sites just lying around to occupy and become their new headquarters. We wanted to put them in a position where they need to kind of “hide in plain sight” a bit more, so one thing we’ll get to see is playing the mutant underground more as a network and less as a place. And that’s for a number of reasons. Part of it is it’s just changing things up in terms of the action, but part of it is also I think it’s interesting, and fun, and thematically more resonant when we get to see mutants interacting with the world we know rather than just interacting with a mutant world.

TVLINE | And Lorna still has a baby to give birth to!
Exactly, we have the baby in there as well, so while there are a lot of forces pushing the two groups apart, there are also a lot of forces pulling them together. Without getting too spoilery, that should give you some idea of what we’re looking at.

TVLINE | Lastly, are there any other familiar Marvel names/references that might get trotted out during Season 2? You just gave us Hellfire Club and a mention of the Inner Circle….
One thing we’ve certainly set up for the comic book fan is a glimpse of the Purifiers. And we’ve heard about [Otto Van Strucker’s research associate] Madeline Risman, so anybody who cares to look up the name “Risman” will put that together…. In looking at what we want to draw from the comics and X-Men lore, those would be two things. Beyond that, we kind of need to figure out exactly what’s happening in the other corners of the X-Men universe. And of course, longer term, if the Disney/Fox thing goes through, that’ll throw another curve ball — so we’ll see how that goes!

Want more scoop on The Gifted Season 2? Email InsideLine@tvline.com and your question may be answered via Matt’s Inside Line.