Did Veronica really die? Promos for the Season 5 premiere of OWN’s The Haves and the Have Nots focused only on Candace’s thirst for revenge — against her mother, the Cryers, David… pretty much everyone who’s ever been on the show. But what we really wanted to know going into the episode was, did Veronica die in the Season 4-ending car crash brought about by the unlikely tag team of Justin and Melissa? Well?!? Read on and find out! 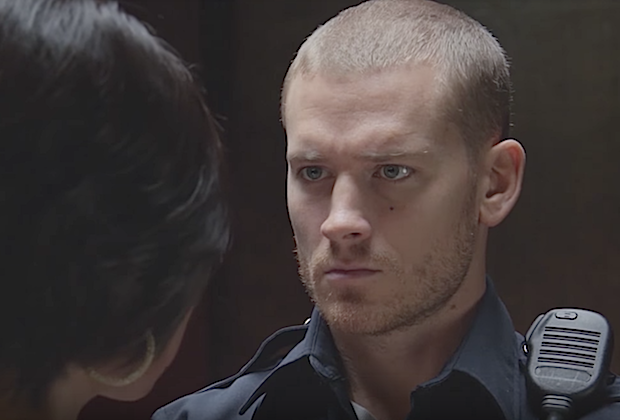 ‘YOU’RE MY MAN’ | As “Afraid of Flames” began, Justin, pretending he wasn’t already well-acquainted with Jeffrey, escorted him from his cell to an interrogation room… and moved in for a kiss. After assuring Jeffrey that he’d disabled the cameras in the room, Justin revealed that there had been no developments with his wife… as he hadn’t been home since the big courtroom reveal. What’s more, he had no intention of losing Jeffrey. When Jeffrey apologized for what Veronica did, Justin said not to worry, “we got that bitch.” What did he mean by that? Jeffrey asked. Repeatedly. In the end, Justin only went so far as to admit that he “took care of” her before copping a feel while re-cuffing the prisoner.

‘I NEVER LIVED ANYWHERE I DIDN’T HAVE TO PAY’ | At Hanna’s new home, Katheryn comforted her friend in the wake of her Season 4 finale confrontation with Candace at the funeral home. When Hanna expressed discomfort at not having her own money, Katheryn suggested that she come back and manage her new home. No can do, replied Hanna. Not after everything that went down between their families. But Katheryn promised not to give up. After Mitch dropped by, and he and Benny excused themselves to the kitchen, Katheryn got a call from a man named Broderick that had her grinning from ear to ear. When she hung up, she explained to her friend that oh yeah, she was very serious about divorcing Jim. She’d even cancelled all of his credit cards! So “who is Broderick that’s got you smiling like that?” Hanna asked. “He’s just the manager of the hotel,” Katheryn replied. The hotel that Jim could no longer afford. As the scene drew to a close, Hanna volunteered to come by Katheryn’s new house — not to stay on, just to help her new maid figure out how the lady of the manor liked things. 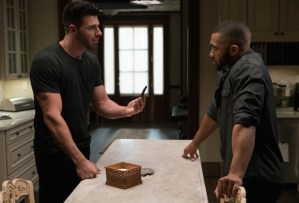 In the kitchen, Benny expressed to Mitch his eagerness to get business going for fear that Katheryn would change her mind one day and take back his mom’s house. Benny even had his eye on a new truck — that is, if the Malones would float him a loan. Mitch pleaded with his pal not to borrow from his family, but Benny was determined. “You’ve gotta help me out,” he pleaded. Ultimately, Mitch relented. He couldn’t let his boy down. So he’d go to his grandma or uncle for him. But, he hastened to add, if something went wrong, there would be nothing Mitch could do to help. Benny’s family would be safe if he couldn’t repay his debt. However, Benny’s legs, knees, arms, etc.… they’d be anything but safe.

‘YOU STARTED THIS!’ | At the hotel, Candace escorted a john into her room and had him hand over his wallet. “Is that it?” she asked, upon finding $1,800 in there. That wasn’t enough. “Look at this body,” she scoffed. “You think you’ll really get it for $1,800?” He did. She didn’t and, adding that she knew who he was, suggested that he leave, fast, and be glad that she’d only robbed him. On his way out, the man passed Benny, who made yet another last-ditch attempt to get through to his sister. But you can probably predict how that went. Not only did she freely admit that she was stealing from would-be clients, she remained 100 percent committed to bringing down the curtain on the tragic chain of events that her manipulations had set in motion. “I’m gonna get even with them,” she said, referring to Jim, David, etc. That being the case, Benny tried to reassure her that when she got past that anger, her family would be there for her. “My family,” she spat back, “was cremated.” When Benny tried to insist that he and Hanna were her family as well as Q was, and invited her to come stay at their mom’s new house, she just shook her head in disbelief. “Keep dreaming,” she said. 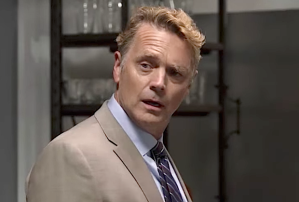 ‘MY CREDIT CARD WAS JUST DECLINED, KATE!’ | Downstairs at the hotel, Jim was making a scene about his declined credit card with handsome young Broderick when Katheryn arrived, smiling like the cat that was about to swallow the canary. “This is not any fun,” he complained. But her lawyer had advised her to keep their funds separate until the divorce was final. Maybe he could turn a trick to raise money? He liked whores, after all, she pointed out. “You really think I’m going to take this?” he warned. And, as a matter of fact, Katheryn did think he was going to take it. If he needed a new place to live, perhaps he could crash with Celine? In response, he argued that Katheryn really didn’t want the divorce as badly as she thought, because if they split, he could be compelled to testify against her. (Was she eye-screwing Broderick during this scene, or what?) Finally, she threatened to have Jim kicked out if he didn’t give her Wyatt’s address. Right before we went to a commercial, Oscar, in possibly the shortest scene ever, watched on a monitor as LaQuita was busted by the cops.

Meanwhile, having passed by a priest in the Season 4 finale, a shaken Wyatt admitted to Anna when they got back home that he’d just seen one of the ones who’d molested him. Back then, “I told them to stop,” he cried. But they didn’t stop. “So that’s why I wanna use” again. In turn, Anna told him no, he wouldn’t be using, he wouldn’t be giving them that power over him. She also tearfully admitted that she’d been abused by her aunt. Though it was clearly a very bad idea, the two of them made their pain go away by hooking up on the couch. 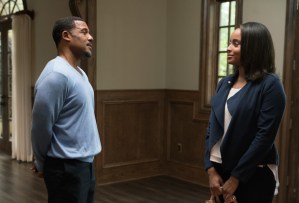 ‘COME ON IN’ | As the hour drew to a close — and our anxiousness to find out if Veronica survived was going into overdrive — David and Erica pulled up to the house that he bought months ago, after the fire at the Harrington house. “It’s way too much house for a single man,” he said. When Erica said she was sure he wouldn’t be single forever, he asked if that was a proposal and went on to suggest that he might take the place off the market if she’d agree to live there with him. “I don’t know what to say,” she insisted. “Say yes,” he replied. All he wanted was the name of her ex. But she refused to spill the beans. Just as David began giving Erica a tour of the place, in barged Jim. “I need to borrow your credit card,” he said, adding that “that bitched kicked me out” of the hotel. Before David could get Jim to leave, they hatched a plan to use Benny, poor Benny, to get Mama Rose to stop giving them the silent treatment. When David gave Jim cash instead of the credit card, Jim rightly deduced that he’d given the card to his new girlfriend already. Finally, in the last moments of the episode, Melissa crawled out from the wreckage of the accident. As Veronica, trapped in the car, pleaded for help, Melissa just laughed. “You’re the devil,” she snickered. “Why are you afraid of the flames?” Things went from bad to worse for Veronica when — uh-oh — she smelled gas.

So, what did you think of the Season 5 premiere? Grade it in the poll below, then hit the comments. And be sure to check out TVLine’s ranking of Veronica’s 10 dirtiest deeds (so far).