HBO’s Barry wants to be an actor so bad, he’d kill for it. (Actually, he’d pretty much kill anyway.) 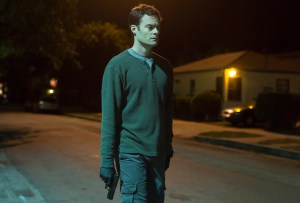 SNL alum Bill Hader stars in the new comedy — debuting Sunday, March 25 at 10:30/9:30c — as a hitman going through a career crisis; in the new trailer posted above, he tells a colleague played by Stephen Root he’s fed up with killing people for money and looking for a new “purpose.” But that all changes when Barry takes a trip to L.A. — a town where everyone‘s “purpose” is to be in the movies.

In town to murder an aspiring actor, Barry follows him to an acting class taught by Henry Winkler and ends up on stage himself — and loves it! He thinks he was “really good,” even though we can plainly see he isn’t. And hey, D’Arcy Carden — Janet from The Good Place — is in his class! Soon, Barry is trying to find a way to take acting classes and pursue his Hollywood dreams… while still killing people on the side.

But what if a potential victim recognizes him from a “chicken commercial,” Root’s character points out? “I don’t know if I’d do commercials,” Barry sniffs.

Press PLAY on the video above for a sneak peek at HBO’s Barry, then drop your first impressions in a comment below.