Jerry Van Dyke, best known for his role as Asst. Coach Luther Van Dam on the ABC sitcom Coach, has died at the age of 86.

According to TMZ, Van Dyke died on Friday afternoon at his Arkansas ranch. Though an exact cause of death is unknown, the actor is said to have been involved in a car accident two years ago from which he never truly recovered. 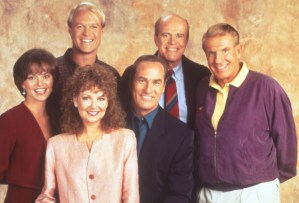 Van Dyke first became known to audiences in 1962 when he began a recurring role as Stacey Petrie in his brother Dick Van Dyke’s eponymous CBS sitcom. He was also a regular performer on The Judy Garland Show before going on to star as Dave Crabtree in the short-lived My Mother the Car, which ran from 1965-1966. His most recognizable role came in 1989, when he was cast opposite Craig T. Nelson in the aforementioned Coach (pictured right), which aired for nine seasons between 1989-1997. During the show’s run, he received four consecutive Emmy nominations for Outstanding Supporting Actor in a Comedy Series.

“I am incredibly sad to hear of Jerry’s passing,” Nelson said in a statement. “He was such a brilliant comedian and we had a great time working together on Coach. It is just devastating news.”

After Coach, Van Dyke had two more prominent roles, as father to Mike O’Malley on CBS’ Yes, Dear and Patricia Heaton on ABC’s The Middle, on which he last appeared alongside big brother Dick in a memorable 2015 episode.

Much love to my wonderful TV dad #jerryvandyke and condolences to my TV dad-in-law #dickvandyke. Jerry, you were hilarious and terrifically talented – what an honor to be able to watch up close as you and your brother create your special magic. Rest In Peace Jerry… pic.twitter.com/O5Sx12vK3q

Van Dyke is survived by his wife Shirley and their two children.