How far does the mutant apple fall from the tree?

Fox’s The Gifted has been exploring that question as it relates to the Strucker kids, who possess the same, lethal-when-merged powers as their great-grandfather and his sister. But Lorna aka Polaris also boasts VIP DNA, as the daughter of iconic X-Men villain Magneto.

And as Season 1 winds down (the final three episodes begin Monday, Jan. 1 at 9/8c), Lorna will be prompted to reconcile her loathed lineage with the fact that she actually shares many of Magneto’s beliefs.

During her recent TVLine Q&A, Emma Dumont said that in the season finale (airing Jan. 15), we will see Lorna “kind of coming into her own.” And since it has always seemed that the mistress of magnetism was already “into her own,” we invited her portrayer to elaborate.

“It’s funny, I’ve been having conversations with the writers and Matt Nix, our creator, about Lorna and that exact thing,'” Dumont said. “She seems so strong and confident all the time — like, we only see very small moments of weakness from her — but what she’s coming into is maybe not her own, but her chosen path, the path she was born into, which is really interesting.” 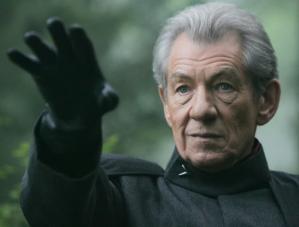 Born into being the operative words.

“Each episode we start with a flashback of a character’s history and the finale is hers, and her journey is really, really heartbreaking,” the actress previewed. “She kind of has to decide, ‘What’s the difference between something you’re supposed to be and something you believe in?’ She knows about this guy who may or may not be her father — I mean, he is, and she kind of hates Magneto. She hates what everyone says about him because everyone in the world she’s in said he was bad and evil — so she’s sort of like, ‘Gosh, I believe the same things as this man. Does that make me bad, or does this mean I’m a fighter?'”

As the multi-pronged “war” that the X-Men, before vanishing, warned the leaders of the mutant underground about takes shape, push will be on a collision course with shove and Polaris will have to decide just how staunchly she subscribes to Dad’s “homo-superior” beliefs and the X-treme measures that may need to be taken against those who wish mutants malice.

“We see her work through that in Episode 12 and 13 [the season finale], and in the end we find out what her decision is,” Dumont shared. “This is the phrase I like to use: ‘She pulls something out of thin air.'”

Want more scoop on The Gifted, or for any other show? Email InsideLine@tvline.com and your question may be answered via Matt’s Inside Line.