Marvel’s Agents of S.H.I.E.L.D. this Friday will get a blast from the past — times two! — when Nick Blood reprises his role as former team member Lance Hunter, who resurfaces back in the present day help Fitz find his friends who in the Season 4 finale vanished in the blink of an eye from the diner.

Blood, who exited the ABC series midway through Season 3, when Hunter and ex-wife Bobbi Morse shared a “spy’s good-bye” with Coulson & Co., spoke with TVLine about his encore (in the fall finale airing Friday at 9/8c), the blossoming Lance/Fitz bromance and the whereabouts about his better half (played by Adrianne Palicki).

TVLINE | When did you get the call to return, and what was your immediate reaction?
Well, there had been various calls and suggestions, the showrunners had spoken to me a couple of times about the possibility of coming back….. I think I first heard through Iain. I think he texted me probably when he wasn’t meant to. He told me what they were planning, and it was very nice to get the opportunity to get a whole episode of me and Iain. We had a lot of fun and were really looking forward to it.

TVLINE | Was there a massive download of context for you, regarding the situation Coulson, May and the others are now in?
[Laughs] Thankfully, Hunter has been absent so he was as much in the dark as I was! I didn’t have to do too much catching up. I got the basics and just ran with it.

TVLINE | What was it like, visiting such a familiar soundstage filled with all of these new sets?
The thing is, because they do such an amazing job of building sets, you’re used to things constantly changing. But seeing what was the [S.H.I.E.L.D.] base transformed into another sort of place is kind of weirdly familiar but very different at the same time.

TVLINE | What can you tease about the circumstances under which we first lay eyes on Hunter again?
Well, he’s been up his usual tricks, doing some mercenary work and bickering with Bobbi…. He doesn’t necessarily have access to all the bells-and-whistles and gadgetry that S.H.I.E.L.D. did, so he has to use his charm and his wit to break down doors, and call in a few favors from his dodgy friends — who at times are quite unreliable! 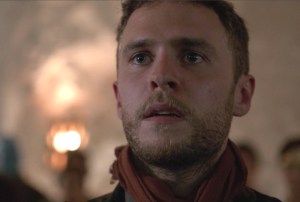 TVLINE | Would you say that Hunter plays a key role in Fitz’s journey, trying to solve this mystery of where everyone went?
Oh yeah, I don’t think Fitz could have managed it without him — or at least that’s what I think Hunter tells himself. Fitz is very grateful to see him, despite the fact that some of his ideas don’t go quite according to plan.

TVLINE | Was it fun to develop the boys’ bromance?
Yeah, yeah, me and Iain are really good friends off-set, we’re very close, so we were both kind of buzzing to get this opportunity. Throughout the series previously, they’ve not really spent a lot of time together — they kind of had scenes every couple of episodes — but we have this great relationship that I think the showrunner and writers were keen to explore and have a bit of fun with.

TVLINE | I can’t imagine it’s a spoiler to reveal that Fitz and Lance get into a bit of a row over football — are either you or Iain that passionate about the sport/teams in real life?
We are! Thankfully Iain is primarily a Celtic fan, and I like Celtic. I’m a Liverpool fan but his English team is Man United, and Man United and Liverpool are big rivals. But Iain’s main team is Celtic, so he’ll happily watch Liverpool games with me. But he’s a lot more chill about it all. 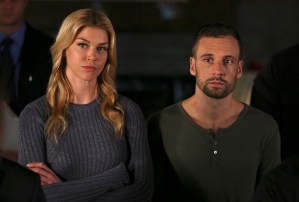 TVLINE | Are Bobbi’s whereabouts, the state of that relationship, accounted for at all?
[Laughs] What I would say is they probably and a tiff a few days before—

TVLINE | As they do….
— and this time apart is allowing her to cool off. Now they each have a little bit of time and space to think until the situation calms down. That’s what I imagine.

TVLINE | Was it interesting to play a storyline without Bobbi in the mix? To have Lance be on his own?
Yes. Yes, it was quite strange, because they make such a good duo. They have a great dynamic together and it would have been really fun to work with Adrianne again, because we get on very well off-screen, we’re good friends and stuff. But Hunter’s got his Bobbi fix, so he’s probably grateful for a little time away from the ex-wife!