Jodie Foster on Friday reprised her Oscar-winning role as Silence of the Lambs‘ Clarice Starling in a spot-on Late Show spoof. The FBI agent, revealed to be working with Special Counsel Robert Mueller, visited with Stephen Colbert’s Hannibal and learned more about his relationship with President Donald Trump. 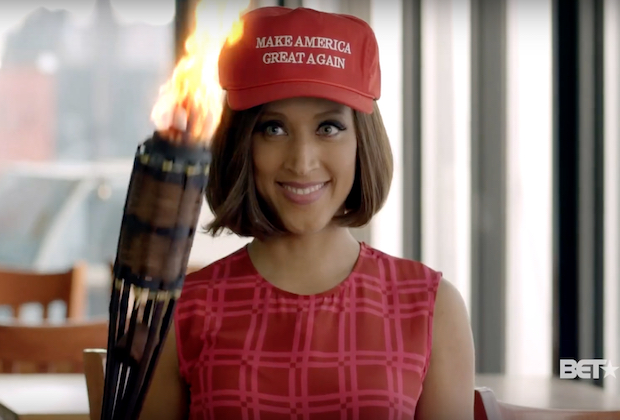 “We were golfing buddies once,” the serial killer revealed. “We ate our caddy. Turned him into a taco bowl… with a nice Diet Coke.”

Later, Hannibal asked Clarice about the mounting evidence against Trump, to which she responded with an exhaustive list of the facts, including “the 12 indictments against [Paul] Manafort and [Rick] Gates; Flynn pleading guilty of Kremlin intermediaries reaching out to the Trump campaign; unreported meetings with the Russian ambassador; the meeting between Donald Trump Jr. and the Russian lawyer; the messages between Donald Trump Jr. and Wikileaks,” and “Trump calling on Russia to find Clinton’s missing emails.”

Once Hannibal pointed out that Clarice wouldn’t actually need his help, the law-enforcement agent revealed the true intention of her visit.

What did you think of Colbert’s politicized Silence of the Lambs spoof? Drop a comment below.