X-Philes, you might want to take a seat, because what we’re going to tell you is a really big deal: Per this exclusive X-Files Season 11 video… it looks like Scully finally has a desk of her own.

We know. We’re as flabbergasted/triumphant as you are. And the special agent’s long-awaited seating arrangement is just one piece of important intel that can be gleaned from watching the video above.

The X-Files Season 11: Intel to Discuss 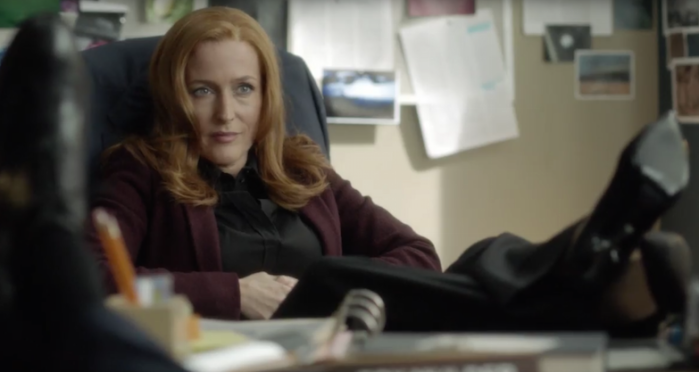 In the clip, series creator Chris Carter — as well as stars Gillian Anderson, David Duchovny and Mitch Pileggi — reassure viewers that any hiccups in the sci-fi drama’s 10th season have been ameliorated in its 11th, which premieres on Wednesday, Jan. 3 (Fox, 8/7c). “It feels more like quintessential X-Files this season,” Anderson says, teeing up Duchovny, who notes, “We’re better set up to get back to the partnership and the banter that comes with that.”

And though the FBI’s Most Unwanted do seem to be back to form in the video, there are a bunch more visuals that we need to talk about. So watch the video above, then click on the gallery to the right for a detailed analysis. And then, hit the comments with your thoughts on the revival’s upcoming season.