CBS on Friday announced the premiere dates for a pair of (very different) series premiering in early 2018. 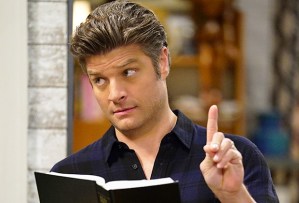 First up is the new comedy Living Biblically, previously known as By the Book. Premiering Monday, Feb. 26 (9:30/8:30c), the series stars Jay R. Ferguson (The Real O’Neals) as Chip Curry, a man who decides to start living his life strictly according to the teachings of the Bible. Living Biblically also stars Lindsey Kraft (Getting On), Ian Gomez (Cougar Town), David Krumholtz (The Deuce), Tony Rock (All of Us) and Camryn Manheim (The Practice).

The premiere dates for returning dramas Code Black and Elementary will be announced at a later date.

Do either of these shows sound like they’ll find their way to your DVR? Drop a comment with your thoughts below.