X-Files devotees, we can feel you thinking about whether or not your favorite FBI agents once more will be a couple when the sci-fi drama returns for Season 11. Turns out, we have a little something for that. (Say it with us now: “Just a little something?“)

Series star David Duchovny recently teased to TVLine that there are “definite intimations of hanky-panky” between the pair, beginning in the revival’s third episode (out of 10). And a new video released today by Fox gives us what looks like photographic — albeit fleeting — proof of at least one potentially sexy situation.

In a featurette that addresses Season 10’s cliffhanger ending, series creator Chris Carter promises “a really interesting dramatic solution” to the crisis raised in the finale: As Duchovny and co-star Gillian Anderson remind us in the video, Mulder is infected with the virus that’s killing everyone and Scully thinks the key to saving humanity is to find their MIA son William, but before they can do anything about it, a UFO shows up directly overhead and seems prepared to beam up the redheaded doc. 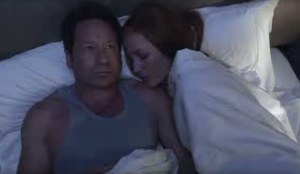 Then, scenes from upcoming episodes flash by in rapid succession. Much of it we’ve seen before in the Season 11 trailer, including Cigarette Smoking Man having a very interesting conversation with Skinner, and Lone Gunman Langly seemingly communicating with Mulder from beyond the grave. But our attention was piqued by a blink-and-you-miss-it shot of Scully and Mulder canoodling in bed together, right around the :52 mark. (Screen grab at right.)

Sure, they don’t look ecstatic in the incredibly quick clip. But f you’re a ‘shipper who wants to believe, you could do worse, right?

Press PLAY on the video above, then hit the comments with your thoughts!