So on which side of the church do the Earth-X Nazis sit?

The CW’s annual Arrowverse crossover kicks off with the wedding of The Flash lovebirds Barry Allen and Iris West on Monday’s Supergirl — but it’s not long before the happy occasion is rudely interrupted by Earth-X Nazis and evil doppelgängers Dark Arrow, Dark Flash and Overgirl. 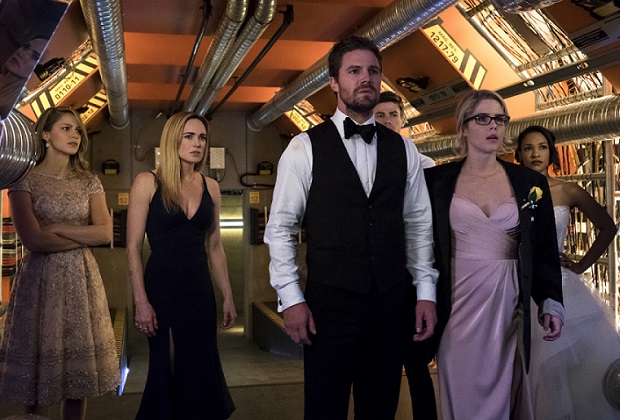 The ensuing battle feels like “a four-hour escape,” Arrow star Stephen Amell describes. “There are some through-line storylines like Oliver and Felicity’s relationship, and Barry and Iris’ relationship, and what’s going on with Sara, what’s going on with Victor [Garber] and Franz [Drameh’s characters on Legends of Tomorrow].” But this year’s multi-show extravaganza, which stretches over two consecutive nights, is “not a crossover anymore,” the actor adds. “Call it the crossover if you want. But it’s kind of like calling the Super Bowl just a football game. Yeah, sure, they play football, but there’s so much other stuff that goes on with it. It’s an event.”

The franchise’s latest event is also “bigger than ever,” with “some of the biggest sequences” and “the most superheroes we’ve ever seen together at any given time” on one of the DCTV shows, The Flash leading man Grant Gustin previews.

It’s not just pure spectacle, although “you really feel the scale of it this year,” Legends actress Maisie Richardson-Sellers says. “One thing they did beautifully is there are lots of personal relationships woven into it as well. So it’s not just one big fight. You also get to know certain characters a lot deeper, and there’s some love in it, and there’s some loss in it. It’s a very emotional journey, as well as spectacular.” 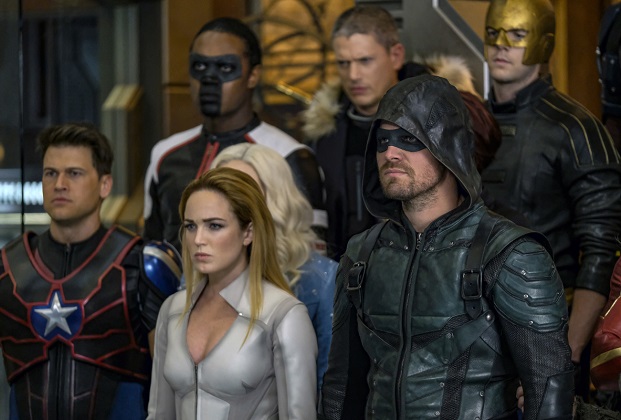 For even more scoop on the “Crisis on Earth-X” event, including Heat Wave’s crush, Iris’ indestructible dress and one of Amell’s favorite scenes of the entire season, flip through the gallery above (or click here for direct access).

Reminder: The crossover begins with Supergirl and a specially scheduled Arrow on Monday, Nov. 27, starting at 8/7c, and concludes with The Flash and Legends of Tomorrow on Tuesday, Nov. 28 at 8 pm.