So many Wellses, so much shameless fun.

During this Tuesday’s The Flash (The CW, 8/7c), the Earth-Two scientist summons some of his doppelgängers to form a brain trust with one mission: to figure out the identity of the baddie known as DeVoe. Looking back at the spectacle that is “The Council of Wells,” star Tom Cavanagh joked during our visit to the series’ Vancouver set that “this show will come and run its course — or it will be like Supernatural and never end — and then it will all be done, but at least we will have this stamp of shamelessness.”

Added co-star Carlos Valdes, who plays Cisco: “This just goes so over the top in such a gratifying way.”

In the end, Cavanagh and the creative team reined it in, paring down the Council from 10 characters to just a few. Affecting a German accent, Cavanagh revealed that among them is a Wells who “thinks everything that is not German is not good.” He’s joined by an Australian “badass from the outback, who doesn’t like anybody. Then we had a little nod to the mansion, because Hugh [Hefner] had passed on.”

But a few iterations of Wells didn’t make the final cut. “Unfortunately, one of the casualties was Wells the Gray, who was a Gandalf guy basically throwing out non-sequiturs,” Cavanagh shared. Also on the cutting room floor: “I think it’s unfortunate the Russian didn’t see the light of day” — for now. But don’t be surprised if some of the castoffs, like Wells the Gray, show up down the line. “In Season 17, when I really will be gray,” the actor quipped. 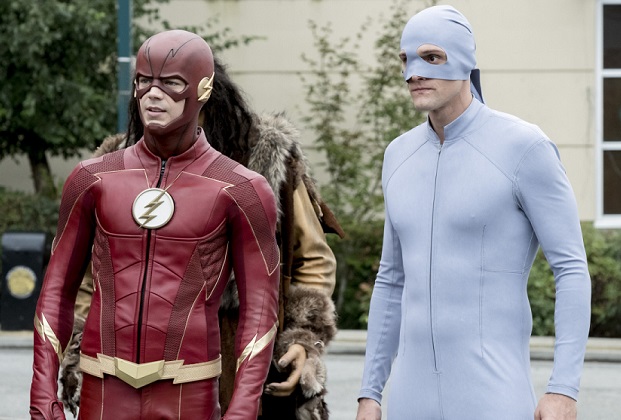 Wells isn’t the only one taking on a new look during this week’s episode. With Ralph Dibny now a part of Team Flash, Cisco designs the newbie hero a rather unique but functional super suit. “But of course, in typical Ralph fashion, it’s not to his liking, so he just mouths off about it, and Cisco sort of has to bear the brunt of Ralph’s frustrations,” Valdes previewed. Eventually, Cisco does craft something more “aesthetically pleasing” for the Elongated Man. “I just saw some renderings, and it made me very happy,” Valdes shared with a smile.

As for how the actual role of hero is fitting Ralph, that proves to be a difficult transition after an innocent young girl is hurt during a run-in between him and a criminal. According to his portrayer Hartley Sawyer, “That’s not an easy thing for [Ralph] to digest and live with, [to] take on the responsibility of knowing, ‘If I make the wrong decision or a different decision, that people can get hurt.'”

Are you looking forward to a wealth of Wellses and a leotard-clad Ralph?