Warning: The following contains spoilers for Tuesday’s Legends of Tomorrow.

Legends of Tomorrow took a wondrous turn this week when Zari brought a time-displaced Helen of Troy to an island full of warrior women instead of returning the Greek beauty to her home.

Tired of men fighting each other in her name, Helen was distraught at the thought of having to go back to Troy. Lucky for her, Zari found a loophole after discovering that Helen’s disappearance during the Trojan War didn’t alter the historical timeline. “Same time that you’re from, but just a different place,” Zari explained, dropping Helen off on Themyscira, circa 1253 B.C. “Best thing about this place? No boys allowed. You’ll finally have some peace and quiet.”

The reference to Wonder Woman’s home turf “really works for the story,” star Tala Ashe said during TVLine’s recent visit to the show’s Vancouver set. “In general, [this] episode is very female-strong, and so it’s appropriate, I think, that that’s the last moment you see in the episode.”

Added Maisie Richardson-Sellers, who plays Amaya: “I think Wonder Woman has paved the way brilliantly, proving that female-focused movies and TV shows can be a huge success. So I think that was a very affectionate shout-out. I liked it.” 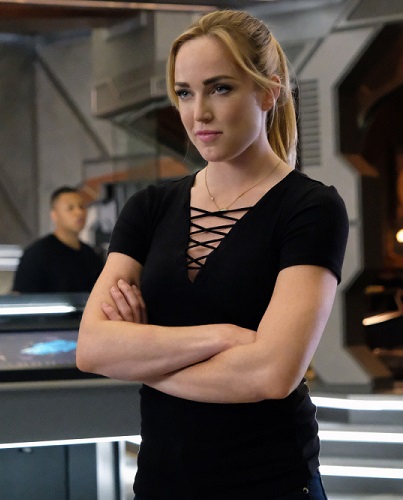 The Waverider team, however, won’t react to Zari’s good deed for Helen with the same warmth. “That’s something you’re going to see a lot of in the coming season: Zari trying to hack time and find these loopholes,” Ashe previewed. “It’s going to come to a head, actually, in this episode that we’re shooting right now, especially with Sara. She’s not cool with it.”

Zari’s rebellious actions are “annoying” for Sara and “something that she can’t really tolerate on the team,” Caity Lotz shared. “She can’t have some new person coming in and messing everything up by trying to do her own thing. If she wants to be a part of this team, she needs to be a part of the team.”

But there’s also an argument to be made that the newest Legend has something to offer when it comes to the show’s historical anachronisms. “When she’s coming across Helen of Troy and seeing her in peril, she’s sort of seeing the possibilities a little bit more than everyone else,” Ashe noted.

“I think what’s great is she gives us a new perspective on the ways that we can alter history and maybe actually improve it, rather than just correct it,” Richardson-Seller added. “So it’s definitely an eye-opener for the whole team, especially Sara, who has very strict rules. She has to sort of reassess, and actually, in a later episode, Zari’s way of doing things is the way that we all survive.”