The BBC on Friday announced that it will not air its adaptation of the Agatha Christie novel Ordeal by Innocence, following multiple rape allegations made against star Ed Westwick, Variety reports.

The Gossip Girl alum has been accused of raping two women: actress Kristina Cohen, who in a Nov. 7 Facebook post claimed that the actor forced himself on her while attending a house party at his residence in 2014, and former actress Aurélie Wynn, whose alleged assault is said to occur at Westwick’s home that same year.

The LAPD is currently investigating Cohen’s claim, while Westwick has since denied both allegations on social media: 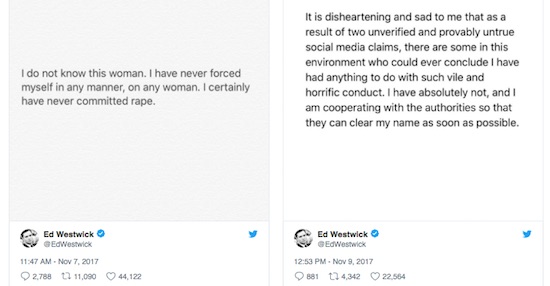 In addition to Ordeal by Innocence‘s postponement, Westwick has also stepped away from filming Season 2 of the BBC Two comedy White Gold, which airs in the U.S. as a Netflix original. (Season 1 was released on the streaming service on Aug. 11.)

“These are serious allegations which Ed Westwick has strenuously denied. The BBC is not making any judgement but until these matters are resolved we will not include Ordeal by Innocence in the schedules,” the UK broadcaster said in a statement. “The independent production company making White Gold has informed us that Ed Westwick has paused from filming while he deals with these allegations.”

Amazon had previously acquired the rights to Ordeal by Innocence to air the three-part miniseries in the U.S. It is unclear whether the streaming service will move forward with its release. Westwick also recurs on the Crackle original series Snatch, which in April was renewed for Season 2.