Saru found his inner tree-hugger this week on Star Trek: Discovery, as the crew visited a remote planet with a super groovy vibe, man. 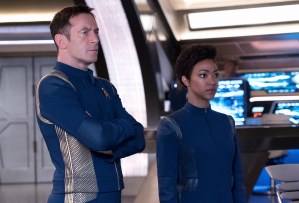 After another Starfleet vessel gets blown up by a caravan of cloaked Klingon ships, Lorca is ordered to find a way to detect those ships while they’re cloaked. So he sends Burnham, Saru and Tyler on an away mission to the forest planet of Pahvo, where the trees and plants all emit audible tones that are harnessed by a crystal transmitter. (It’s all very New Age-y.) Starfleet wants to modify that transmitter to use those tones as sonar to detect the cloaked ships. Hey, don’t ask too many questions, OK? It’s Star Trek.

Down on Pahvo, a blue gaseous form appears in front of them and leads them into a wooded tent, where Saru attempts to explain their mission. Suddenly, the blue gas starts to envelop Saru, and he seems shaken afterward. He tells the others he’s just disoriented, not hurt, but that night, he walks outside and complains to the blue gas creature about the constant hum of noise on this planet. The blue gas envelops him again, and visions of all his past fears flash before his eyes; the next morning, Saru is refreshed and more carefree than we’ve ever seen him. He asks Burnham and Tyler to hand over the communicators, and promptly crushes them: “These are no longer necessary.” 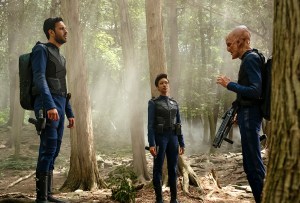 It seems Saru has discovered a newfound inner peace thanks to the Pahvans, and wants to stay there forever. The planet has everything they’ll ever need, he tells Burnham and Tyler: “We will be so happy.” Tyler’s not content to sit out this war, though; he wants to make the Klingons suffer for what they did to him. He distracts Saru while Burnham runs to the transmitter and tries to modify it quickly, but Saru, with his predator-evading super speed, catches up and tackles her. He starts to crush the transmitter, but Burnham convinces him that no inner peace is possible until this war is over. The blue gas creatures help them fire up the transmitter, and the team beams back onto the Discovery — with Saru still mourning the paradise he lost.

KEEPING UP WITH THE KLINGONS | Meanwhile, Admiral Cornwell is still a prisoner of the Klingons — remember that, from a few weeks back? — and L’Rell offers to interrogate her to extract intel about the spore drive. But once inside Cornwell’s cell, L’Rell tells her, “I want to defect,” and offers to help free her if L’Rell is promised safe passage. They sneak out of the cell, but when they’re caught, L’Rell is forced to kill her. (“At least you won’t die in a cage,” she tells Cornwell.) When L’Rell is disposing of Cornwell’s body, though, she discovers the bodies of a number of her Klingon comrades and vows vengeance on her power-mad leader Kol. L’Rell pretends to pledge her allegiance to him, wearing his house’s red battle paint, but he sees through her lies and has her taken away.

Just then, though, the Klingons get a message from the planet Pahvo. It’s the blue gas creatures, who are using their crystal transmitter to contact both Starfleet and the Klingons in hopes of brokering peace. Um, these creatures don’t know Klingons very well, do they? 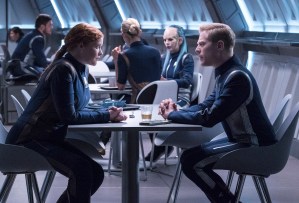 * After a few weeks of being a laid-back hippie, thanks to the spore drive, Stamets returned to his usual grumpy self this week, and Tilly took notice — especially when he called her “Captain.” Stamets admitted he’s been having moments where he’s not quite sure who or where he is. Uh-oh… is Starfleet’s secret weapon in jeopardy? (Remember, they don’t have the tardigrade to fall back on anymore.)

* This week’s episode was reminiscent of the original Trek series’ “This Side of Paradise,” where the Enterprise crew lands on a planet ruled by strange flowers that emit hallucinogenic spores, and Spock ends up falling under its spell — and falling in love! (And even though Burnham was raised Vulcan, Saru is really Discovery‘s Spock, right?)

* The episode title — “Si Vis Pacem, Para Bellum” — is Latin for “If you want peace, prepare for war.” Sounds like just the contradiction Burnham, Lorca and Starfleet are wrestling with these days.

* A nice callback to the classic Spock statement “The needs of the many outweigh the needs of the few,” when Burnham cited it during her debate about the Klingon war with Tyler. Looks like Tyler has a few needs of his own, judging by that kiss he laid on Burnham, huh?

* I’m a little confused by L’Rell’s motivations. Did she really intend to leave the Klingon ship with Admiral Cornwell? And would she really renounce her life as a Klingon to join the Federation? It just didn’t make sense to me… but then again, her story is far from over.